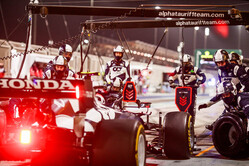 Yuki Tsunoda: "I'm happy I managed to score points in my first Grand Prix - I think this race showed how great the performance of the car is. I have to say, I'm a bit disappointed still as I lost a few positions on the first lap - due to being too cautious - and had to work throughout the race to recover these. I've learnt a lot here in Bahrain, which is really positive, and I will take this with me to Imola. I had some strong overtakes during the race and, for me, overtaking Fernando was quite an emotional experience, he's a Formula 1 superstar that I've grown up watching, so that was pretty exciting. I'm really proud of my performance and I'm looking forward to seeing how we do next time out."

Pierre Gasly: "I'm obviously very disappointed right now because we've had a very strong weekend since we arrived. Starting from P5 I was hoping for some good points today, but my race was pretty much over after the contact with Daniel in lap one. I broke the front wing, I had floor damage and I was obviously very far behind after just one lap, so my race was almost finished from there. It's a big shame because we've shown some good pace all weekend and we haven't managed to get the rewards of that today, but I think there are still quite a lot of positives to take-away from this weekend and that's what we'll look at for Imola."

Franz Tost (Team Principal): "After a satisfying qualifying session yesterday, Pierre started on the grid today in fifth position and Yuki in 13th. The start of the race was good, with Pierre coming back in the first lap to keep his fifth position. Yuki had a reasonable start too, but then he was passed by a few other drivers - behind Ocon he then had to brake quite hard, causing a flat-spot on the front right tyre which meant he started feeling some vibrations. After the safety car, Pierre had a collision which caused damage to his front wing, coming down to corner five, therefore we had to pit him to change it - which of course took some time. Maybe the softer compound would have prevented the accident, as the grip on the mediums after the safety car was quite low. From then onwards, Pierre's race was compromised as he also had damage to the floor, which meant quite a big loss of performance. Nevertheless, in his last stint he showed some fantastic lap times and was really one of the fastest out there. Unfortunately, we had to retire him towards the end of the race for a suspected gearbox issue that we need to investigate further. At the end, he couldn't score any points, but he did a fantastic job in qualifying yesterday and he showed the race pace was there today - he was just unlucky.

"Yuki had his first race in F1 and I must say he really did a fantastic job. We told him his aim was to come back from the first lap with a healthy car to be able to run his race, and that's exactly what he achieved. He showed a lot of good overtaking maneuverers - I believe he was the car that completed the most overtakes - and his lap times were also very competitive, with the medium tyre as well as with the hard compound. He deserved ninth position and it was really nice to see how he fought against Kimi, Lance and others - I think we can look forward to the season ahead with him. He is the first Japanese driver to score points in the debut race, and it's great he achieved this result with us. I'd like to say a big thank you to everyone at Honda for putting in so much work over the winter months to provide us with such a competitive PU, essential to our performance. Even if I expected a better result this weekend and today we couldn't get it together in the way we should've done, having a really strong package makes us look forward to Imola now."