"He was sensational," says Marko 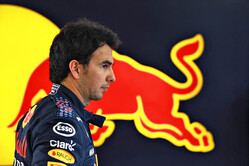 Helmut Marko sings the praises of Sergio Perez, believing the Mexican is as fast as teammate, Max Verstappen.

On paper it wasn't the best of debuts, having qualified 11th and finished the race 5th, almost a minute down on his teammate.

However, as is often the case, the stats don't tell the full story.

A poor strategic call from Red Bull compromised the Mexican's qualifying, while in the moments before the start of the race Perez suffered a software glitch.

"The problems we had were mainly related to the software," Marko tells Formel1.de. "Perez' battery was changed at the last minute, that's probably the reason why he suddenly lost power.

"He was sensational," adds the notoriously hard-to-please Austrian. "He took off his steering wheel and carried out all the emergency scenarios coolly and suddenly the power came back."

"It was the first race of the year, so it was mainly getting used to it for him," he told RTL. "When Perez had free air he was just as fast as Verstappen."

Referring to qualifying, Marko admits: "We should have put him on the soft tyre in the second session, that was our mistake.

"If Perez had started from fourth or fifth on the medium tyre he could have given Valtteri Bottas a hard time," he added, the Mexican having finished 15s down on the Finn.

"Had he started on the soft tyre, he would probably have lost so much time on pit-stop strategy that an attack on the Mercedes driver would be difficult."