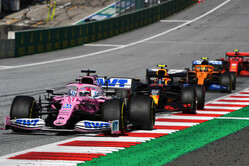 While copying rivals is almost as old as the sport itself, the idea of teams sharing technology is a relatively new concept and came to a head with last year's infamous 'Pink Mercedes', 'Tracing Point' saga.

While the FIA was already seeking to limit the amount of technology teams could share, in a bid to appease those teams protesting the Racing Point the sport's governing body tightened the rules still further, particularly in terms of 'reverse engineering'.

Article 22.3.3 of the technical regulations, defines reverse engineering as:

a) The use of photographs or images, combined with software that converts them to point clouds, curves, surfaces, or allows CAD geometry to be overlaid onto or extracted from the photograph or image

b) The use of stereophotogrammetry, 3D cameras or any 3D stereoscopic techniques

c) Any form of contact or non-contact surface scanning

Article 22 also covers listed team components (LTC), those "components whose design, manufacture and intellectual property is owned and/or controlled by a single competitor or its agents on an exclusive basis". These components include the survival cell, the front impact structure, roll structures, brake ducts and bodywork.

As ever however, it isn't the actual rules that cause concern but rather how the FIA will police them, as the regulations now make clear teams must be able to prove the entire design, manufacture and R&D provenance of the LTCs.

Teams may outsource the design of these components - as Haas has done with Dallara - but even then this process must meet certain criteria.

"New regulations were put in place," said McLaren boss, Zak Brown recently. "We're confident the FIA will monitor that very closely and will make sure that the rules are executed as they should be.

"We're an independent team," he continued. "We're of the view that everyone should be a constructor but there is obviously the ability to collaborate but we just have to have our trust in the FIA, that they'll monitor the situation and make sure the rules are followed accordingly."

Indeed, McLaren and Alpine are effectively the two only independent teams, for while Mercedes has arrangements with Aston Martin and Williams, and Ferrari with Alfa Romeo and Haas, Red Bull has its 'sister' outfit, AlphaTauri.

"I think we've got to trust the system," says Toto Wolff. "Like Zak said, the regulations have been more prescriptive. By the end of last year they have been clarified. Everything that could have been bound to an interpretation was described in a very solid way, so everybody knows what's on and what is not on.

"There will always be areas of collaboration between teams," he continued, "but they are not in areas of any IP nor any exchange of information or in whatsoever way so I believe that everybody... it's down to all of the teams to perform, carry on with their own development but there will be some infrastructure that's being shared within the regulations and obviously that creates the positive effect of economies of scale, revenue stream for the bigger teams and fantastic state-of-the-art facilities for the other teams.

"But we equally recognise a situation like McLaren has, that this needs to be, in a way, ring-fenced in terms of the regulations, so there's absolute clarity what's on and what's not."

"Last year we saw the regulations stretched to the limit of what's feasible and what isn't," says Christian Horner, "and I think the FIA are acutely aware, and again, as the governing body, you have to trust in them to police accordingly.

"I think obviously there is the topic of the 2022 car which is a clean sheet of paper and again the FIA need to be on top of ensuring that no team artificially benefits through that of a customer or affiliate or associate team. It's something that we at Red Bull take very, very seriously and the relationship with Toro Rosso and now AlphaTauri has scrupulous discipline to how we operate, respectful of those rules. Of course you trust in the governing body to police those and enforce those accordingly."

"Last year created a precedent," added Alpine CEO, Laurent Rossi. "There is very clear instructions as to which parts are open and which parts are not, what is permitted or not.

"Everything is excluded for some parts, even photos and stuff, so we strongly believe that last year served this purpose and that the FIA now is very vigilant."