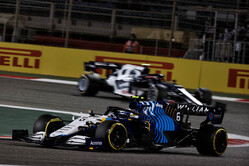 Despite coming from outside the F1 'ecosystem', Williams boss, Jost Capito believe new technical director, Francois-Xavier Demaison is the "perfect fit" for the team.

While Haas has all but thrown in the towel on 2021, admitting that it will not "put any effort into anything" other than the battle with Williams for ninth in the constructor standings, the Grove outfit clearly has other plans.

Since Dorilton Capital bought the team there has been 'behind the scenes' investment, while 'front of house' there have been some significant signings.

In December, the team announced the recruitment of Jost Capito, who, had previously worked with Porsche, Sauber and Ford, where he spent an extensive amount of time as the company's European motorsport director, working in various categories from Formula Ford up to F1 with Jordan and Ford's own World Rally Championship team before joining Volkswagen where he oversaw further success, particularly in WRC.

One of Capito's first appointments to Williams since joining was that of François-Xavier 'FX' Demaison as technical director, having worked with him at Volkswagen.

Capito believes 'FX' is the "perfect fit" for the Grove outfit as it regroups ahead of its bid to return to the midfield.

"I was very happy to announce FX as a technical director," says Capito. "I found a lot of technical experience within the team and then of course FX has to work on defining his team and what is necessary to add on competence or capability we will do."

Asked if it matters that Demaison comes from outside the F1 'ecosystem', Capito is in no doubt.

"Yeah, it matters a lot and for the good, I would say," he responds. "You think that he is coming from outside the Formula 1 ecosystem, he has never been in Formula 1, it was always his target to get in Formula 1.

"He is a brilliant engineer and he worked for nearly ten years now with Willy Rampf, who has been a technical director in Formula 1, and they worked very close together.

"And with that a lot of Formula 1 spirit, technology, insight went into the WRC car and especially in the IDR," he adds. "So, he has this kind of experience and he learned a lot from Willy Rampf during that time, so I think he is the perfect fit for Williams."

Asked about Demaison's transition to Williams, given that the team's focus is already mainly on 2022, Capito says: "The technical team works pretty well, so it's nothing that he comes and has to fix something that is broken.

"Second, as I know, FX he is a relentless worker. He is a workaholic and since he sees the chance that he could become technical director at Williams I'm absolutely pretty sure it's a lot of time he spent, all his free time he spent, to understand the regulations and to fully understand Formula 1.

"I know he is in close contact with Willy Rampf as well, so I think he is very well prepared when he arrives."

Asked when Demaison will actually take up his role, Capito responds: "It should be after Easter.

"After Brexit we need work visas if we are going to come from the EU to the UK," he continues, "so that includes a three-hour English test, which I had to do as well and luckily passed. FX passed it as well so he got his papers so something in the first two weeks of April he should start."