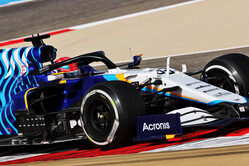 Dave Robson, Head of Vehicle Performance: It was hot this afternoon, meaning that the tyre performance dominated the FP1 running. Both George and Nicholas completed their programmes and had no issues with the car. The cooler evening session offered more suitable conditions for qualifying and race preparation and we were able to complete useful running on both cars despite the shorter Free Practice session format this year.

We have had a very successful day, have collected all the data we wanted and had a first proper look at a qualifying and race simulation using the race tyres for this weekend. The performance of the car is still below what we would like, but we are making progress and we are confident that we can push the car hard for the remainder of this weekend, especially on Sunday.

George enjoyed a calm and well-constructed day during which he built-up his confidence in the car, finishing with a well measured stint on the qualifying C4 tyre. Nicholas made a few changes to his car ahead of FP2, but the change of wind for the evening session dominated the balance and he found it a little difficult to recover his momentum from FP1. He will reset overnight and then use FP3 to get himself ready for the key qualifying session.

George Russell: It was obviously tricky conditions today and I think the track temperature was up at about 48 degrees at some points in FP1, which is incredibly hot. FP2 felt pretty good and our high fuel pace was better than expected even with these gusty winds, so I was pleasantly surprised by that. Equally the wind is changing so much at the moment, which affects everybody a huge amount, but I believe our car is more sensitive to these changes. Fingers crossed it is either calm or in a favourable direction tomorrow and Sunday. I think it will be a long and tricky race, but I am looking forward to it.

Nicholas Latifi: It was a difficult one today. It was very tricky, and I was struggling to find the right balance with the car. We had different issues in different practice sessions. FP1 was one thing and we tried to solve it and went too far the other way. I wasn't satisfied in FP2 on the low or high fuel, so we have a lot of work to do tonight. We need to dig into the data and see what we can find.