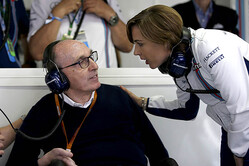 The husband of former Williams team boss Claire Williams has hit out at what he perceives a snub by the makers of the Drive to Survive documentary, Netflix.

The third series of the documentary series was released on 18 March to mixed reviews, with many feeling it seeks to sensationalise certain aspects of the sport.

However, Mark Harris, husband of Claire Williams, whose father, Sir Frank Williams founded the legendary Grove outfit, admits frustration and upset that arguably two of the biggest stories of the 2020 season were seemingly ignored the documentary's makers.

2020 saw the Williams family sell their legendary team, the most successful British outfit in terms of constructors' titles, and while this didn't get a mention in the documentary, nor did team driver, George Russell when he replaced Lewis Hamilton in the Sakhir Grand Prix.

Talking to Instagram, Harris claims it defies belief that neither story was mentioned, Russell himself having taken to Twitter to comment: "Getting to episode 10 and realising you're not in #DriveToSurvive", and accompanying the tweet with a selfie showing the British driver sporting a clear look of disbelief.

"It is impossible to hide the level of frustration and upset I feel around the latest season of Netflix's Drive to Survive," wrote Harris.

"It is hard to believe that there was a more important story (other than COVID-19) than the sale of one of the most historic, successful and treasured teams the sport has ever seen," he added.

"Over 50 years in the sport, 16 world championships and the legendary team principal Sir Frank Williams and the family leaving a sport that they helped make what it is today, and barely a mention.

"What a disgrace. It feels like a total lack of respect to SFW, Claire and the team itself."

While admitting that the protocols in place last year due to the pandemic made filming more difficult than usual, Harris insists that this doesn't justify the team's total omission.

"It's easy to say there wasn't access granted," he wrote. "No, access wasn't granted to any film crew other than Williams' own to the very private moments when Claire had to tell the team that the family were having to sell and leave the sport they love and breathe for.

"But an abundance of footage was made available by the team and all crews had access at all other times. What a shame it wasn't used."

Of course, at a time F1's powers-that-be claim that new manufacturers, teams and race hosts are beating a path to their door, the demise of one of the oldest and most successful on the grid might not fit the agenda.