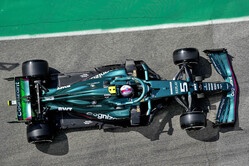 As he calls for the revision of the aero rules that are compromising his team (and Mercedes), Aston Martin boss, Otmar Szafnauer hints at potential legal action.

Other than COVID, F1 has had it pretty easy until now.

Yes, there was the 'issue' with Racing Point last year, but for the most part Liberty Media bosses must have been wondering what all the constant bickering under Bernie Ecclestone's management was all about.

The sport finally has a budget cap, the teams signed a new Concorde Agreement with the minimum of fuss, and barely a day goes by without the inhabitants of Planet Paddock telling us how wonderful everything is... the days of Bernie having to bash heads together a distant memory.

The first hint of potential trouble came in Bahrain, when Lewis Hamilton suggested that the aero rules introduced this season - ostensibly in the name of safety - were actually an attempt to handicap Mercedes.

"It's no secret that what the changes have... of course they've been done to peg us back," said the Briton in the moments after missing out on pole position to Max Verstappen.

"We had the changes of course last year to our engine to do the same thing," he added, a reference to the rule forbidding changes to engine mode changes between qualifying and the race introduced late last season.

"But that's OK, we love a challenge and we don't look down on these things, we just work hard to be the best we can. And that's what we'll do."

Hamilton's comments came just 24-hours after team boss, Toto Wolff had echoed similar thoughts, the Austrian claiming that changes to the floor, diffuser and brake ducts meant that those teams running low rake were losing as much as a second a lap to those with high rake.

"I think we've probably suffered more with the change of regulations than the cars with the higher rake," said the Austrian, who confirmed that Aston Martin, which also utilises a higher rake, was similarly suffering, a fact confirmed by Otmar Szafnauer.

A poor showing in pre-season testing was followed by an equally unconvincing season opener for Aston Martin, Lance Stroll claiming a sole point for tenth, the Canadian lucky to hold off the Alfa Romeo pair behind.

Aware that, unlike Mercedes, it simply doesn't have the resources to get on top of the issue in the same way that the German team might, and therefore risks a season of fighting for the scraps from the table, Szafnauer is now calling for the aero rules to be revised, admitting that legal action cannot be ruled out.

Furthermore, feeling that the changes were not necessary in the first place, he is unhappy that the lines appear to have been blurred in terms of the FIA and the sport's Commercial Rights Holder, stating that Formula One Management should not be involved in rule making, albeit for 'safety purposes'.

"I think the right thing to do is to have the discussions with the FIA and find out exactly what happened and why," he told Sky Sports.

"We as a team have to work hard to try to claw back everything we can," he continued, "but at the same time we should be having the discussions with the FIA to see if anything can be done to make it a bit more equitable."

Referring to F1's influence on the decision to change the rules, he said: "The regulation change that was made for safety reasons, that kind of governance rests solely with the FIA.

Pushed harder on what influence F1 bosses might have had on the changes, he added: "Like I said, I think that type of regulation change rests solely with the FIA. They're the experts."

Asked whether his team, should it get no satisfaction from the FIA, would consider legal action, he replied: "I think we get to that point after the discussions.

"It's hard to predict," he added. "I think the right thing to do is to see what can be done."

Wolff, who clearly has a vested interest in proceedings, was giving little away.

"I think this is a tricky subject," he told Sky Sports, "because you need to have the full picture before making any comment.

"At this stage, I don't think it would be right to point the finger at someone or somebody. So I'd rather not talk about it for the time being."