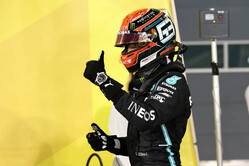 George Russell has dismissed speculation that he and Lewis Hamilton are no longer talking following last year's Sakhir Grand Prix when the Williams driver stood in for the world champion.

On a weekend Hamilton was sidelined by COVID, Russell almost claimed pole - missing out by only 0.026s - and looked to be on the brink of a major upset by winning the race until fate played its hand.

Hamilton was back in the Mercedes for the season-ending race in Abu Dhabi, but going into the off-season, and with a new contract yet to be agreed, there was speculation that Russell's performance in Sakhir might compromise negotiations by giving the German team a cheaper alternative.

In a subsequent interview team boss Toto Wolff was asked if it was true that since Sakhir there has been a rift between the two drivers, the Austrian, while making clear he was not aware of any issues, admitting that there is always fierce competition between all drivers both on and off the track.

Asked at today's press conference about the rumours of a rift, Russell was keen to end the speculation.

"The question towards me was, did you speak to Lewis after Bahrain," he said, "and no, we didn't speak, as we wouldn't speak after any other race.

"We are racing against each other," he continued. "If we see each other in the paddock, we would speak. We've seen each other this year, a little fist bump along the way, and that's the same as it's been since 2019 and last year before the Bahrain Grand Prix.

"My relationship towards Lewis is the same as it is with a lot of the drivers up and down the paddock, which is completely fine," he added. "So there's no hard feelings and no issues between myself and Lewis."

Reminded of last year's race at Imola, where his race ended following an unforced error behind the safety car, the Briton admitted: "I made what is probably the biggest mistake of my career.

"It's a track where, if you make a mistake, you're out," he continued. "But that's what racing should be about! I'll look to try and rectify my mistake from last year with a good result this weekend.

"Imola is a fantastic circuit," he added. "It's very fast and you really need to be committed. It also has a lot of character that the newer tracks sometimes lack, and you feel that when you're bouncing over the kerbs. I'm very happy that the track is back on the calendar this season."