Wolff sheds light on toxic relationship between Hamilton and Rosberg 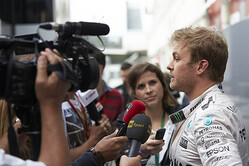 Shedding light on the toxic relationship between Nico Rosberg and Lewis Hamilton, Toto Wolff admits that he had to resort to ruling with an "iron fist".

The Austrian arrived at Mercedes at the same time as Hamilton, who had been recruited by Niki Lauda and Ross Brawn.

While Rosberg and Hamilton had become great friends during their karting days, at Mercedes things soon fell apart. Indeed, in only their second season together, the pair's in-fighting was compromising the team, never more so than at Spa, when a second lap clash caused damage to Hamilton's car that subsequently caused him to retire.

During the podium ceremony, Rosberg, who finished second to Daniel Ricciardo, was loudly booed. While, the FIA declared the clash a "racing incident", Mercedes issued the German an undisclosed punishment.

Though the pair were given the freedom to continue fighting, over the seasons that followed there were numerous further incidents, not least their infamous first lap clash at Barcelona in 2016.

"It was very difficult," admits Wolff to the High Performance Podcast, "because I came into the team as a newcomer in Formula 1, and Nico and Lewis had been in the sport for much longer.

"But still, I was able to create an environment where they had to respect the team," he adds. "Sometimes with an iron fist, or iron grip, and they understood that they couldn't let us down, they couldn't let Mercedes down.

"I always made it clear that if this were to happen regularly, and I would see a pattern, then I have no fear in making somebody miss races.

"The thing the drivers want the most is to compete in a car. And you always need to be very clear that you compete in the car if you understand the team game.

"It's much more difficult because there are only two drivers in the team and it's not easy to find a replacement, and a replacement on that level. But I'm prepared to sacrifice a race or two just to make it clear for all future generations that are going to drive for Mercedes that that's not on."

On reflection, Wolff admits that given their form, it was probably wrong to partner the pair in the same team in the first place.

"I'm not sure we got the best out of both," he admits, "because that is negativity, and you still have to be a team player. If the debriefing room is full of negativity because the two drivers are hostile with each other, then that will spill over into the energy of the room, and that is not something that I will ever allow again.

"That happened, but I couldn't change it, because the drivers were hired before I came. And nobody actually thought; 'what was the dynamic between the two, what is the past between the two?'

"There was a lot of historical context that none of us knew, and will never know. And that's why it's something that we're looking at: how do the drivers work with each other, what happens in the case of failure with one and another.

"We accept the annoyance and pain if it goes against one, but we're trying to still keep the positive dynamic in the team. And if it didn't function anymore, that's fine. If we were to fail again, that's fine... but we're changing the driver line-up."

And now he has Hamilton and "wing man" Valtteri Bottas the iron fist is in a cupboard gathering dust.