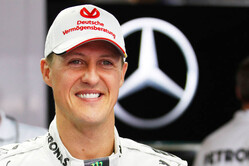 Long-serving members of the Mercedes team admit to "regret" and "heartbreak" that Michael Schumacher never won a race with the team, far less was given any credit for the team's subsequent success.

Long-time readers of this site will possibly remember when we seriously wondered where the Brackley facility that is now home to Mercedes was cursed.

Our concern centred on the fact that despite its laughable "tradition of excellence" the original tenant, British American Racing, failed to achieve anything. The team was subsequently bought by Honda, which again failed miserably, the outfit's lack of direction best summed up by the infamous 'My Earth Dream' debacle.

Then came the twist...

Technical boss, Ross Brawn and partners bought the team for a pittance, and suddenly everything fell into place. Armed with the double diffuser technology that Honda had paid for, Mercedes customer engines and a rumoured £100m budget from Honda, Brawn and Jenson Button went on to win both titles at the first attempt, the first team to do so.

However, even then, the team's early season advantage was slipping away, and having won six of the first seven races, the team, now under intense pressure from Red Bull, won just two of the remaining ten races.

At season end it was announced that Mercedes had bought a majority stake in the team and weeks later it was revealed that, new signing, Nico Rosberg, was to be joined by seven-time world champion, Michael Schumacher.

On paper, Schumacher's time at Mercedes was unremarkable, the German scoring one podium finish and a best championship result of second in his second season.

From the outset, the media, in particular the British media, which had never taken to the German, took every opportunity to criticise Schumacher, gleefully reporting any occasion on which he was beaten by a younger rival and suggesting that his titles were all about the cars at his disposal - a claim they never level at Lewis Hamilton.

When Schumacher waked away from the sport in 2012, to be replaced by Hamilton, the value of those three years at Mercedes was widely questioned.

However, as Mercedes went on to totally dominate the hybrid era when it was introduced in 2014, some wondered if the team was finally reaping the rewards of Schumacher's involvement, after all, along with Brawn, Rory Byrne and Jean Todt he had helped turn Ferrari around.

Speaking in the latest episode of the Beyond The Grid podcast, long-serving members of the Mercedes team admit their "regret" and "heartbreak" at the German legend's lack of success with the team and that he has never been given credit for his contribution.

Strategist, James Vowles recalls Schumacher taking pole in Monaco in 2012, the German team's first since its return to the sport as a constructor. Despite a 5-place grid penalty handed to him at the previous race (Spain), going into the race Schumacher remained confident.

"My situation is going to be pole," he told reporters, "start the race in sixth and I'm going to win it". Unfortunately, having been one of several drivers caught up in a first lap incident that necessitated the deployment of the safety car, a subsequent fuel pressure issue brought his race to an end after 63 laps.

"I was over the moon and I think it was one of the best laps he'd probably ever done in his life," says Vowles, "but I was heartbroken, truly heartbroken for him that this is a guy that we all wanted - around this table and within the factory - for him to win a race, because he deserved it frankly, and he put so much effort into the team and so much of his life into the team that it was payback for him and that was his opportunity through the year.

"I was heartbroken with the fact that that one race was where he dropped back. I felt for him - I still feel now - he didn't get all the results that he deserved give the amount he was putting in the team."

"Given how he helped us improve, I think certainly my biggest regret was not seeing Michael win a race for us," adds sporting director, Ron Meadows, "because he was a different level of driver we'd ever worked with at that point.

"I really believe, we all wanted him to win, but it didn't happen. A couple of years later we couldn't stop winning and he deserves some of that because the reason we're winning today, a lot was down to him because he made us better."

"He had shortcomings in terms of how he was able to drive the car relative to Nico, but he was very conscious and aware of that and doing what he could to remedy those areas.

"But the areas which, in truth, part of it was age, where he wouldn't be helped to find anything on it, were there. I think he also knew that was his time.

"I just wish he won his race because one more year, that would have been a fantastic year for him," admits Vowles.

Note: Since that dreadful day in December 2013 we have avoided using portraits of Michael. However, this is very much a positive story, and we thought it only right to accompany it with an appropriate image.