Great races to come of him, says Horner of Perez 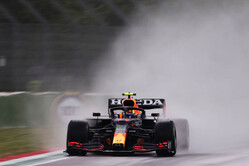 Another of the Imola weekend's heroes to zeroes, was Sergio Perez, who, following his superb performance in qualifying, which saw him put the RB16B on the front row alongside Lewis Hamilton, had a nightmare race in which he eventually finished a distant 12th.

Slow off the line, he was subsequently passed by both Max Verstappen and Charles Leclerc, and while he managed to re-pass the Ferrari driver, he subsequently lost the position again after going off at Piratella.

He was then handed a 10s penalty for overtaking Daniel Riccardo and Pierre Gasly behind the Safety Car on rejoining the track following his Piratella off.

Working his way back to fourth, he served his penalty at the first stop and rejoined in fifth, maintaining the position until red flag that followed the Bottas/Russell clash.

On lap 37 however, he made another unforced error at Tosa which saw him off and in the gravel, and by the time he got going again he was down in 14th.

"Very, very sorry first of all to my team, because I wasn't there today," said the Mexican at race end. “Very poor conditions meant that I struggled to put any temperature into my tyres, so therefore the car was very difficult to drive... even on the Safety Car, I went off.

“I came back and I got the penalty for that, which meant I lost the position to Norris and that made things trickier.

“Then, at the end, I think we should have finished on the podium. Unfortunately, I did that mistake and that was very costly."

While the media has yet to begin giving the Mexican the 'Albon treatment', team boss, Christian Horner predicts great things this season for the Mexican.

"It was tough for him," said Horner, according to Reuters, "he had such a good Saturday... but the race just didn't go his way.

"A couple of little mistakes, particularly the spin behind the Ferrari," he added. "Tough for him because we should have taken a lot more points out of Mercedes.

"He had good pace in the race and there's still a long, long way to go," the Briton, who believes Perez merely needs more time.

"It's different to what he's used to," he said. "He did a mega job to put it on the front row, only just missed out on that pole position.

"There's great races to come from him in the future," he insisted. "We could see in clean air his pace was strong."

For the benifit of Sky pundits, Perez is currently 33 points down on his teammate, after the same number of races in 2020, Albon was just 3 behind.