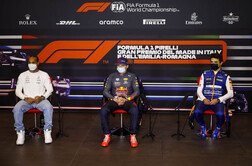 Max, congratulations, that was a wild afternoon, but you had it covered; a great victory.
Max Verstappen: Yeah, it was very challenging out there, especially in the beginning. It was very hard to stay on track to be honest; it was very slippery. And then of course with the tyres degrading in the wet and then choosing the right moment to go onto slicks is never easy. I think we managed everything well. And then a little moment on my restart...

That was so close?
MV: Yeah, but everything else went really well today, so of course very happy with that.

But you had a wonderful run down to the first corner on the original start to take the lead.
MV: Yeah, I was surprised myself. Last year we had been struggling a little bit off the line but we had worked really hard to make that better and you saw it in Bahrain but now in these tricky conditions I think we did a great job.

Lewis just took the fastest lap towards the end, so he is still a point ahead of you in the world championship, but you are right back in there.
MV: Yeah, but it's a long season, so let's stay calm.

Lewis, where do we start on that race? Congratulations for bringing it back in second place.
Lewis Hamilton: Thank you. First, congratulations to Max. He did a fantastic job today. Just solid work from him and also to Lando - what an awesome job and so good to see McLaren back up there. On my side it was not the greatest of days. It's the first time I've made a mistake in a long time but I'm grateful I was able to bring the car home still.

Take us through that error at Tosa. You were passing some lapped cars?
LH: Yeah, there was only one dry line and I guess I was in a bit too much of a hurry to get by everyone. Coming to the inside, I could see it was wet and I was trying to stop but the thing wouldn't stop and it sent me off. A bit unfortunate but I'm really, really grateful that we got to get going again and to get some points for the team was really important today.

So, during the red flag break, did you ever imagine that you would still be leading the world championship and that you would finish second?
LH: I wasn't thinking about. I was just trying to get over the gutting feeling it is when you make a mistake and just moving on from it and just learning real quick and you don't have time to dwell on it so that's what I did - get back into the racing spirit. I didn't know whether or not we would be able to overtake, because again, offline was going to be wet, but still had some great battles with all the guys.

Lando, on the podium again, second time. Whoa, that was... you were really having to defend hard but your pace was so strong.
Lando Norris: Thanks. I'm happy. I think a nice recovery after yesterday. It was a long race. A tough one but I didn't start so well, y'know. It was a tough start but I came back through. I had good pace. I tried hanging on to second but Lewis was a bit too quick for me today so... yeah, it's nice to be fighting these guys. It's nice to be there on merit and there on pure pace - and hopefully we can have some more in the future.

With Lewis in your mirrors, you kept your head. There was a lot of pressure there, and you were talking about a bit of clutch-slip - so you were managing a few things.
LN: Yeah. That was my knee-pad, was hitting my clutch-paddle so that was my own mistake. We opted to go on the Softs for the restart and I had good pace for the first 10 or 15 laps but I knew I was going to struggle a lot towards the end - especially with Lewis behind me. It was not going to be an easy one. But I tried. I held on for two or three or four laps but in the end I just couldn't hang on - but I'm happy with third. I'm not disappointed.

Well, the fans appreciated it. They voted you driver of the day.
LN: They did? I didn't think I had any fans! But thank you very much.

Max, many congratulations. That was a very impressive win in what were at times very difficult conditions. How satisfying is it to win a race like that?
MV: Yeah, it's never easy a race like this; it's quite stressful out there to make the right calls. The key, I think, was to have that good launch, which was also a bit of a surprise to me! After last year, where we always struggled in the wet, over the winter and the beginning of the year we definitely made some improvements with that and today it was very good. But then after that, to make the right call from intermediate to slick tyres was not easy, because I saw a few guys ahead of me on slicks tyres but they were struggling a lot. But even on the intermediates... they were finished, so to keep on going was difficult, a lot of sliding around, so if you would go a few centimetres off line you could lose the car, so not easy out there. But once we put on the slicks all fine. But then of course we had the red flag, with so much debris into Turn 2, so basically the advantage was gone. And then I had my moment on the restart. That was a big one. Some secret tyre warming going on, but after that it was fine.

In terms of setting up the win, how important was it for you to take the lead at the first start?
MV: You always try to make the best start possible and once I saw the launch was very good of course you go for it. But of course it was very important around here.

Lewis, that was a very eventful for you. What's your overriding emotion after that race?
LH: Grateful. Max did a great job today and so did Lando. I think juts really grateful for the lesson. I didn't get away the best at the start, it was very tricky conditions at the start. But we're only human, so just that bit of a mistake was one to learn from. I'm just grateful I could get going again and get back into the race. It's not how you fall; it's how you get up. Really awesome to get back to second. I had a good battle with Lando towards the end. I definitely didn't know I would be here when I was facing that barrier.

It wasn't only Lando that you were battling with. How much did you enjoy the charge back up the field?
LH: Oh, I loved it! Honestly, that's how my career actually started when I was younger. When I was a kid coming through we had a really dodgy old go-kart, so I was always starting at the back. So it just took me back to my roots. It's a really hard track to overtake on, but I think that Turn 2 kerb changed the balance in some way and I think it worked well for that dry condition we were in.

Lando, coming to you. Well done on taking your second podium in Formula 1. The last 24 hours have been an emotional rollercoaster for you. How do you sum-up the weekend?
LN: On the whole I'm very pleased with the... with myself but the team as well. I think apart from Q3 it was a pretty perfect weekend, I want to say. We improved the car a lot over the first couple of days, from Friday into Saturday, and through the sessions and so on and we didn't start on the best foot - but we improved a lot. I felt like I did a very good job in qualifying. Was the first time I only had to do one run in both Q1 and Q2, so I did good enough laps to save the tyres, give myself a good opportunity into Q3 and be pretty close to pole position and then, effectively almost P3 and then get put down to P7. It was near-perfect from my side, and the team's. I think we did a very good job. I was disappointed yesterday so to come back to third today after a pretty eventful race for myself and, I'm sure, the others as well, was rewarding for myself, but more importantly, the team.

Did you enjoy that battle with Lewis?
LN: It was tough. We made the decision to go on the Softs. I wasn't so confident to get the tyres working. It's not an easy track to overtake on - Lewis might say otherwise! - but I think it was the right decision. Apart from Max's little moment, I though Charles was going to drive ahead of Max on the restart, as he was off-track, so didn't take advantage of that but he had a lot of wheelspin on the restart when Max went, and that's the fault of the Mediums and their decision. We made our decision to go on the Softs, I got a good launch, good restart and got ahead of him. I pretty much started saving the tyres from lap one after the restart, knowing that the last couple of laps were going to be pretty tough. And they were. Especially with Lewis at the end. I think a lot of focus is the last couple of corners, getting the deployment right, using the battery in the right way. So, I was trying to save up as much as possible. In the end, I didn't have enough rear tyre out of the last two corners and the chicane to hold him behind but I tried. It was a nice little battle. It's nice to be racing unusual cars, I guess for us, a Red Bull, a Mercedes, and Ferraris and things like that. It's nice to be going up against them. Hopefully we can have some more of that in the future.