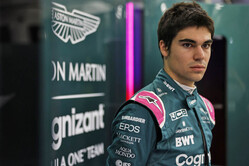 Lance Stroll has been demoted to 8th place in today's Emilia Romagna Grand Prix for gaining an advantage by leaving the track.

The Stewards were informed after the race of an alleged breach and having reviewed the video and heard from the drivers, involved, concluded that Stroll was not able to complete his pass on Pierre Gasly at Turn 2/3 without leaving the track completely, shortcutting Turn 3 and returning to the track ahead of car the AlphaTauri.

The Canadian failed to give the position back.

In hearing from the drivers the stewards accepted that Stroll was ahead of Gasly at the point he left the track, but that he was in that position because of a manoeuvre that he was not able to complete on the track given the wet conditions.

The 5 second time penalty involved sees the Canadian demoted from 7th to 8th, on another difficult day for Aston Martin.

Ahead of the race both cars suffered rear brake issues, and while Stroll was able to make the start, teammate Sebastian Vettel was forced to start from the pitlane.

To add insult to injury, the German was handed a time penalty for not having his tyres fitted within the mandatory 5 minute window before the race start.

A subsequent gearbox iissue saw the four-time world champion retire just a few laps from the end of the race.