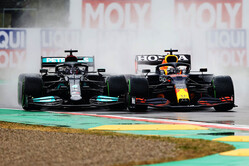 In the hours leading up to today's race, F1 finally announced that a deal has been agreed which will see Miami join the schedule from next season... meanwhile nary a word about the impending cancellation of the Canadian Grand Prix which takes place in just a few weeks.

But that's F1. As we have always said, long before the pandemic the sport was living in its own little bubble.

Further proof that the sport lives in a parallel universe can be found merely by looking at the official title of today's race, the grandly named, Formula 1 Pirelli Gran Premio Del Made In Italy E Dell'emilia Romagna 2021.

Earlier this week, one of the title sponsors - for there are two - Pirelli, proclaimed that the event will help "demonstrate the prestige of 'Made in Italy' to the world".

A somewhat ironic claim under the circumstances, for, without getting too political, even the most basic research will soon reveal why Italy was one of the European nations most affected by the pandemic, especially in the early days. While many of the goods coming out of Italy might sport the prestigious 'Made in Italy' label, the workers that make them are largely not Italian, nor the companies that manufacture them.

The anticipated rain showers do not currently look as though they are going to happen, nonetheless we should still be in for a great race.

While Sergio Perez starts alongside Lewis Hamilton, the Mexican is on softs, while the Briton, and Max Verstappen, are on mediums.

With Valtteri Bottas starting from eighth, not only is Hamilton up against two Bulls, the Austrian team has the luxury of having its drivers on different strategies.

Though Perez was delighted with his qualifying position, admitting that a late mistake probably cost him pole, Verstappen could barely contain his frustration at missing out on the coveted starting position, the Dutchman describing his final lap as "messy".

Though we have grown used to - and extremely bored with - Mercedes forever playing up its underdog stance, there was no mistaking Pete Bonnington's surprise at his boy, Hamilton, claiming pole. Indeed, the world champion appeared equally shocked.

From this dynamic trio we take a trip into the Twilight Zone, where anything can - and usually does - happen.

Ferrari has been on the pace all weekend, and while Leclerc served up another of his stunning qualifying performances, teammate Sainz was unable to make it through Q2 and therefore has a difficult afternoon ahead of him.

Wisely, Ferrari has been playing its chances down this year, but there is no reason why Leclerc shouldn't bring home a decent points haul this afternoon, and maybe even a couple from his Spanish teammate.

It was mixed fortunes for AlphaTauri, with little Yuki crashing out in Q1, breaking his gearbox in the process, and therefore starting from the back, while another epic performance saw Gasly qualify fifth.

Having had his race compromised before it had barely begun in Bahrain, the Frenchman will merely be hoping for a trouble-free getaway this afternoon, after which he will hopefully show us what the AT02 can do. As for Tsunoda, the excitable Japanese driver's bid to get into the points should be worth the price of admission in itself.

For the second successive weekend, Lando Norris starts behind his McLaren teammate, even though much of the weekend thus far has belonged to the Briton. Having marginally missed out on a front row start, Norris will be keen to make up for yesterday's costly Q3 error, while Daniel Ricciardo can always be relied upon to give 100%.

Starting from eighth, and like his Mercedes teammate, on mediums, we have Bottas, who, other than the task of overhauling the likes of the McLarens, Gasly and Leclerc, is likely to be under intense pressure from behind especially at the start and will do well to make it to the end of the opening lap intact.

From there we essentially move into F1's equivalent of the Wild West, with Ocon, Stroll, Sainz, Russell, Vettel, Latifi, Alonso and the Alfa pair all sure to provide some sparks.

As we have seen, it is notoriously hard to overtake here, consequently, other than those drivers willing to give it a try, most are going to rely on strategy, and in the wake of how Mercedes turned the tables on Red Bull in Bahrain it is going to be fascinating to see how things play out today.

Other than Aston Martin's call to have the aero rules changed, track limits continue to dominate, and have proved to be a real pain this weekend. However, as Norris acknowledges, rules are rules, and have to be obeyed.

Assuming it does indeed remain dry, for most drivers today will be one-stopper, for three main reasons. Firstly, it's hard to overtake around the narrow confines; secondly, the pit lane time loss is high at nearly half a minute; thirdly, the wear and degradation on the tyres is reasonably low.

A two-stopper will definitely be slower, so the teams will look to avoid that if possible. Track position is key and steering clear of traffic is important, so the timing of the stop will be critical. An advantage can often be gained by 'undercutting' direct rivals, so the selected strategy has to consider this as well.

Just under an hour before the start it begins to rain. However, to add to the fun and games, it is only one part of the track that is affected, Tosa, while the remainder of the circuit is dry.

As the drivers head out, Verstappen, who is on inters, reports "massive rain", while Alonso goes off and lightly clouts the barrier. As before, it is still only raining in one specific part of the circuit.

"The final sector is pretty much completely dry," reports Norris, "the rest is sketchy."

Meanwhile, both Aston Martins appear to have rear brake issues, Vettel's are smoking while his teammate's are ablaze. "Drive quickly to put it out," the Canadian is told.

Bottas is advised that he has a rear-left puncture. "OK, interesting," he replies.

Stroll arrives on the grid and his crew get to work.

Though the rain has stopped, there remains a lot of standing water. Meanwhile, a heavy mist lingers over much of the circuit.

Following a national anthem sung with great gusto, there's a fly-past by the Italian Air Force.

As the clock ticks down, work continues on the two Aston Martins.

Hamilton is told there will be a light shower around ten minutes into the race, but after that nothing, and certainly no more heavy rain.

Race control says there is an 80% chance of rain.

So, while the soft/medium start strategy is out of the window, what we now have to look for is the switch from wets/inters to slicks.

Gasly, Ocon, Schumacher and Mazepin start on full wets, the rest are on inters.

Vettel will start from the pitlane as the team was unable to complete the work on his car in time.

The field heads off on the warm-up lap. While the grid is dry, come Tosa we see the traditional rooster sprays.

Leclerc spins off on the formation lap, the Monegasque lucky to make it through the gravel trap.

A lot of understandably nervous faces on the pit-wall and in the garages.