"I effed it all up," admits Norris 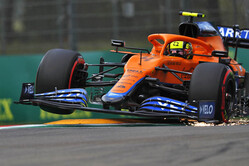 Lando Norris takes the blame for the mistake which saw him lose out on a front row start alongside Lewis Hamilton.

In the final frantic moments of qualifying, amidst the numerous greens and the occasional purple, one name stood out on the timing screens... that of Lando Norris who was clearly on a blistering lap.

Sure enough, the McLaren driver crossed the line at 1:14.454 to claim second, thereby joining fellow Briton, Lewis Hamilton on the front row.

Barely had his team begun applauding his efforts however, when the message came up that his time had been deleted for exceeding the track limits at the infamous Turn 9.

Consequently, for the second successive race, the youngster qualified seventh, behind teammate, Daniel Ricciardo, who has not enjoyed the most convincing weekend thus far.

"Pretty disappointed, pretty annoyed with myself," Norris told Sky Sports. "I think it was a very good day until then, the team did an awesome job.

"You know, the car really came alive in qualifying," he continued. "We made a lot of improvements on Friday, but that one lap that I don't need to make a mistake on... I effed it all up.

"It's the same for everyone," he added, "so at the end of the day it's my mistake.

"The car was really good. It was nice to drive, it was obviously fast, but one little mistake and it all goes down the drain. So pretty disappointed but it happens, so I’m looking forward to tomorrow."

Looking ahead to the race he admitted: "It is definitely going to be a lot more difficult than Bahrain. I guess that is why it is a bit more annoying because here it is a lot about qualifying. And then just staying in that position for the race.

"We will do our best, we will try and overtake and try some different things to come through. We deserve to be a little bit higher, but we were not. We have a chance to go forwards but it is going to be very difficult."

The Briton isn't the only driver to fall foul of the track limits rules, nonetheless he appreciates the need for the clampdown.

"There is a rule and it is quite simple," he said. "You are not allowed to go over it. But when you are going two hundred kilometres an hour, it is quite hard to judge literally this much. It is not as easy as it might look on TV.

"Without track limits the racing would be awful," he admitted. "There would be no rules so they are there for a good reason.

"I do not feel like they have had me over," he insisted, "it is the same for everyone else. It is just that I went wider than everyone else. Simple as that, I made a mistake. I should be a lot higher up than I am."