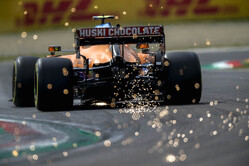 Daniel Ricciardo: "I think on paper it's not a bad result, P6. It's really tight at the front. I think the weekend has been a bit slow for me to get going. We got a bit closer in quali and I certainly made some improvements, but I still think – and I hate to say it – it's just going to take time to keep finding the limits. I'm getting there. I obviously wish I could be there from lap one, but I think it's been a weekend of progress so far and there are definitely positives to take after qualifying. We've worked well as a team to recover from a difficult Friday, so thanks to the team here and in the factory for their hard work. I wouldn't say I'm ecstatic, but I'm certainly content with our progress."

Lando Norris: "A disappointing end to qualifying. I think the whole thing went very well and I was very happy with my laps all the way through. We only did one run in Q1 and Q2, which I think is the first time I've ever done that. So things were looking hopeful, but I just overdid it slightly on my final lap, which was a very good lap but just a little bit wide and the lap was taken away. Pretty disappointed, because we could've been a lot higher up and in a much better position for tomorrow.
"After we struggled yesterday, we've done a lot of work and the feeling in the car was much better today. The team both here and at the factory has done a great job overnight to work on improvements and give us a car that felt quick and was capable of fighting right up there and maybe even for pole. I'm gutted, but there are still a lot of positives to take away from today and hopefully we can convert them into a good result tomorrow."

Andreas Seidl, Team Principal: "P6 and P7 after an exciting qualifying session puts us again in a strong position to fight for good points tomorrow. We initially felt a bit disappointed after seeing what would've been possible with Lando, who was flying today, but it was very positive to see how competitive we've been. Daniel didn't feel as comfortable in the car as Lando earlier in the weekend but did a great job, together with his engineering team, building it up throughout the quali sessions and putting in a good lap at the very end.

"Well done to the team here at the track, back home and at Mercedes for developing and producing a competitive car. Full focus now on preparing for the race. The weather forecast predicts rain for tomorrow afternoon. Let's get some good points again."