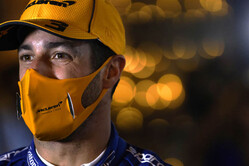 Daniel Ricciardo: "It's a pleasant relief to get the first quali out of the way and get a decent result. I think, after the test, I was fairly comfortable in the car but probably more so on long runs. I still felt that, if anything, my Saturdays were going to need improving - and I think they still do - but I certainly made a nice step from a couple of weeks ago and I'm happy. We've got a good platform to build on now, I'm really happy with how we approached it as a team, not putting too much pressure on me. We were a bit off the pace yesterday, but they could see I was just trying to figure it out.

"I don't want to do somersaults or backflips just yet, but it's certainly a nice start for the campaign and I think we'll do alright tomorrow. There's a mix of cars around us, so I'm looking forward to that, and with Lando alongside hopefully we can get some big points for the team and start the year right."

Lando Norris: "Tricky qualifying, just because it's very close between everyone. First one of the season, so I think we're pretty happy with sixth and seventh for the team and getting to see where the car is - it's a good position for tomorrow. It's probably a bit more of a race track than a qualifying track, so hopefully, after focusing a little bit on that throughout the weekend, we can be strong tomorrow."

Andreas Seidl, Team Principal: "We've got off to a good start in our first qualifying session of the year. Great work from the whole team, along with our colleagues from Mercedes, which allowed us to execute three very good qualifying sessions. Both drivers put in excellent laps to get us into Q3 and then to P6 and P7 on the grid. We saw the expected close battle between ourselves and several other teams - and that makes for an exciting race tomorrow. Our long runs have been good so far, both in testing and free practice, so we're going into the race confident in our ability to compete for good points."