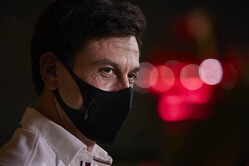 Let's start by talking about performance. A question to you all please. What are the issues you identified during testing and on the evidence of the first practice session today, how much progress have you made with those issues over the last ten days? Zak, let's start with you please.
Zak Brown: We had a smooth winter test. Got everything accomplished we wanted to. The integration of the Mercedes power unit went very well, so we accomplished what we hoped to. In the development of these cars you're always looking to make improvements and learn and testing faults but I'd say so far everything has gone according to plan. We just need to keep on our progression.

Toto please?
Toto Wolff: With us, testing didn't go so smooth. We lost quite some time with little gremlins and then we never kind-of found the sweet-spot of the car. There was a lot of work being done in the last ten days in between. I think we've found the path forward that makes the car more predictable - but obviously these climate conditions now, with the heat, is hardly representative of what to expect tonight, and then especially on Sunday with the wind.

Christian?
Christian Horner: We had three positive days. Obviously a much-reduced pre-season this year but no, generally pretty decent. Tricky conditions. They were the same for everybody. I think we might experience some of those conditions over the next couple of days with high winds but no, I have to say the car ran well on all three days.

Thanks. And Christian, staying with you, do you relish the 'favourite' tag or is it something you don't want?
CH: Well Tom, you should know by now that, being judged on a day's work or whatever, would be foolhardy. Mercedes have dominated the World Championship for the last seven years. It's a probably 60 per cent carryover car from last year. One swallow doesn't make a summer, as they say and I think that whatever difficulties they had in the test, they've got huge strength in depth and we know it would be very, very foolish to underestimate them. So, I think with the kind of success they've achieved, not only last year but the last seven years, it would be foolhardy to think that anybody other than Lewis and Mercedes are the firm favourites going into this championship.

OK, Toto, do you agree with that assessment?
TW: I think what Christian says is just what happened over the last years and is the logical consequence. This is a fact you can't ignore. But also, even if it looks like a carry-forward car there was still... I think we've probably suffered more with the change of regulations than the cars with the higher rake - and the Red Bull has followed that concept since many years. So it's maybe more difficult for us to recover some of the lost downforce - but so far, what I've seen, and what I hope is that we can have a really tough fight. It's what the fans want to see and what we would like to have. Red Bull is a formidable team with people pushing really hard. They've won four championships before the hybrid power units came in and no doubt they're the strongest competitor - but these guys here [McLaren], they have a really good power unit now in the back so mustn't not consider them either.

Toto, you said after testing that Red Bull are the favourites. Is it a strange sensation being the hunter rather than the hunted?
TW: When I say that, it's always the scepticism that I feel we haven't been good enough. In Formula 1 it's like in many other sports, we are oscillating between depression and exuberance and when everything is perfect you think 'here we go, this is ours' - and then when you have a few days that are not very good, you kind of look at the data and say, 'well, should we ever catch that up?' So, this is what it is. I think, if we are behind, then we just need to catch up and do a good job. If we are just about on the same pace, which I would consider today maybe as the best possible scenario for us, then we are up of for the fight with another great team.

Zak, everyone's talking about this season being a two-horse race between these guys. Do you think you can gate-crash the party?
ZB: Hmmmm... no. I think realistically, Mercedes and Red Bull have been the class of the field here for a while. We hope to close the gap but I think it would be unrealistic to think that we would get in the mix on a regular basis - but we're on our way and hopefully we'll be able to join that fight in the not-to-distant future.

(Christian Menath - motorsport-magazin.com) Question for Toto and for Christian, can you tell us a bit about the run plan for FP2, considering it is only 60 instead of 90 minutes?
TW: So, we are running flat-out with 20kg. We are hiding a bit but not... in all seriousness it's obviously much more compressed, which is good. Everybody's going to be earlier on the track, more running time, rather than a tactical waiting for the track to come towards you. The programme is like many of the Fridays, the FP2s before, getting in some long runs. It's not about the long runs you can get in but more consecutive laps, and trying to tune the car in climate conditions that are more similar in respect to what to expect from qualifying and the race.

Christian?
CH: I guess the upside is, as Toto says, there's going to be more track action because you've got to cram into 60 minutes what you had to do in 90 minutes previously. So short-run, long-runs and, of course, it's the more relevant session to qualifying and the race. The temperature will drop significantly, so the first session, I would say, take with a pinch of salt - but obviously the characteristics of the car are going to be somewhat different as the temperature changes and obviously that's going to be the most important one for the engineers and drivers to get a read for both qualifying and the race.

(Dieter Rencken - Racing Lines) Last year, after the brake duct issue, the FIA issued a technical directive about what is, and isn't allowed amongst teams, particularly teams that source their major components from another team. Toto, you and Christian both have customer teams - if I can call them that - or allied teams but equally, you also have competitors that have them and Zak, you don't have that situation. So, are you concerned that possibly this situation will not be able to be controlled this year?
ZB: New regulations were put in place. We're confident the FIA will monitor that very closely and will make sure that the rules are executed as they should be. As you mentioned, we're an independent team. We're of the view that everyone should be a constructor but there is obviously the ability to collaborate but we just have to have our trust in the FIA, that they'll monitor the situation and make sure the rules are followed accordingly.

(Christian Nimmervoll - motorsport.com) Question is to all three gentlemen on the stage. Zak made some comments earlier today that he thinks it's very possible Mercedes will race George and Max next year. I'd be interested to hear what you think about this prediction.
CH: I don't know! It's speculation. Maybe they're as likely to run Daniel and Lando! We're at the first race, we obviously acutely aware of what the contracts with our drivers are. It's a bit early for speculation.

Toto?
TW: I want to keep out of the discussion that these two have about who's going to drive the Mercedes.

Well, Zak, what makes you think...
ZB: I don't necessarily think it. Someone just asked me 'what do you think the driver market will look like next year. I believe George is out of contract and obviously has a Mercedes relationship and did a great job here in Bahrain. Max, I've never seen his contract but understand that there's probably a possibility for him to drive elsewhere and Mercedes and Toto are able to attract an awesome driver line-up. So, if those two guys are floating around, depending on what Toto decides with his current driver line-up, you could see that happening. I was asked the question - it wasn't a prediction, it was an opinion.

Toto, are you hoping to get your drivers for 2022 nailed down earlier than you did for this season?
TW: Certainly. We don't want to leave it until January to confirm the two drivers. Valtteri was pretty regular during the summer, this is when it should happen. Also, to give the driver peace-of-mind, or be able to concentrate on the job. And obviously for next year there's lots of balls in the air and we will always try to do the best for the team long-term while also giving total loyalty to our current driver line-up. We are not doubting either Valtteri or Lewis but discussions obviously are going to happen - but not in January next year.

(Andrew Benson - BBC) For all three of you. On the subject of sprint races. The proposal started as one thing and it's become something else. Has there been any discussion about standing back and asking - is it really doing what it was intended to do - and therefore is there really any point in introducing it. And also, secondary to that, also discussion on the potential for confusion as to what denotes a Formula 1 winner or a grand prix winner and whether that's going to get difficult for people watching from the outside?
TW: I think probably we share the mindset that we are racing purists and we know of the importance of the grand prix. It's always been like that and we mustn't dilute the attraction of that singular event happening Sunday afternoon as somehow a cornerstone of everybody's weekend. Now, we have always been very reluctant to change that traditional format and I have seen some experiments in other race series where they have put in a second race on Saturday and the audiences were actually quite interested. Having said that, it by far didn't have the importance and tradition like Formula 1, so we need to be really careful of how we are testing things. We are in a data-driven world. We simulate, and here we are talking about going live with something that hasn't been simulated properly. So, I don't think we want to block anything - it's worth the experiment - but we need to be very careful with it, with the format that we have and with the responsibility we carry for Formula 1.