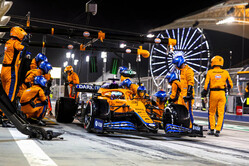 While Red Bull and Mercedes battle for all-out supremacy in terms of the titles, McLaren's Andreas Seidl admits it will be some time before the pecking order in the midfield becomes clear.

As the 'circus' heads to Imola, McLaren leads Ferrari, but problems for Pierre Gasly in Bahrain mean that AlphaTauri has yet to show its hand.

Then there is the sizable question mark in terms of Alpine and Aston Martin.

The revelation that Daniel Ricciardo damaged his floor in his clash with Gasly reinforces the idea that McLaren has the edge, but, despite finishing fourth and seventh in the season-opener, Andreas Seidl is not counting his chickens.

"I think we simply have to wait for more tracks now with different characteristics, different ambient conditions, different tyre choices, to see if there's a kind of a trend," says the German.

"I think what is also clear are the cars around us, the cars we were battling with, they made also good steps forward compared to last year and the battle is again within a few tenths," he adds.

"This also means you can quickly swing by strengths or weaknesses of one or the other car, depending on some characteristics of the tracks or ambient conditions.

"It is very close," he admits, "and we simply need to make sure we keep moving on, both analysing and understanding the package that we have to get more out of it.

"Then, we need to keep bringing updates to the car in next races to make sure we stay on top of this fight."

The German was also keen to pay tribute to Mercedes, especially in light of the limited time the Woking outfit has had in adapting to its 'new' power unit supplier.

"All the guys from Mercedes have worked so hard together with us over the winter to integrate the Mercedes power unit into the car," he says. "To go through the first race weekend we've been together without any issues is simply down to the great work everyone has done who was involved."