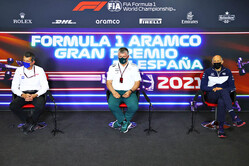 Franz, you've been in the back-end of the points for the last couple of races. Are you satisfied with that or frustrated that you didn't deliver more?
Franz Tost: I am upset. Because, especially the race in Portimao was not good for us. We struggled with the set-up because of the special conditions there, with the low grip level and with the wind and we couldn't provide the drivers with the proper car and the race before, in Imola, we made a mistake with Pierre Gasly, sent him out with the wrong tyres at the start and this, of course, had a very bad influence to the race outcome. Yuki did quite a good job but unfortunately the second half of the race he had a spin where he lost some good positions. Therefore I hope that we reset everything in the proper way and that we are back here in Barcelona with both cars in the points.

We'll come to Yuki in a minute but how useful is it for you to be back at a track that you know well this weekend - in terms of it being a good benchmark for the team?
FT: Of course, Barcelona is now the first racetrack of this year where we really can evaluate the performance of the different teams and, if you are fast here in Barcelona, then I think you are competitive for the rest of the season. If you are struggling here, then you have to find solutions to catch up. Therefore this race here in Barcelona is very important for us.

On car performance, Pierre said yesterday that slow corners are a weakness for you guys this year. If that's the case, are you expecting a couple of tough races coming up in Monaco and Baku.
FT: Yeah, OK, Monaco is a completely different characteristic from the set-up of the car. All the cars will be much softer with maximum downforce. I hope that we can sort out this. Today we had, in the slow-speed corners, some smaller problems but I think we can get rid of it. Yuki had a bit too much understeer in slow-speed and mid-speed corners but no major problems, and Pierre was, with the Soft tyres, quite satisfied. With the Hard tyres, he said the car was a little bit too disconnected. The engineers are sitting out together to find out hopefully a proper set-up for FP2 and for the rest of the weekend.

The last couple of races have been quite tough for Yuki. Why so? And what are your goals for him this weekend in Spain?
FT: The goal is, the goals are first of all that he can do as many laps as possible because a newcomer, also if he knows the racetrack quite well, needs to get familiar with the car and with everything at this track. I expect him to be close to Qualifying Three and, in the race, if everything runs well, if we find a proper set-up, he is able to score points.

Otmar, tough race in Portugal for both of your drivers but what did you learn? What did the upgrades bring to performance on Lance's car in particular?
Otmar Szafnauer: So, we had the upgrade just on Lance's car and yeah, it was a tough race for us. Lance started 17th and didn't quite get a good lap in, in Q1, so he didn't get out of Q1. In the race he was a bit stronger than Seb and partly due to the fact he had the upgrade and Seb didn't. We've got the upgrade here on both cars, so we look forward to evaluating him on both cars now.

What does the upgrade bring in terms of performance. Where is the car better?
OS: Well, we focussed our entire efforts now on the downforce reduction that was introduced through the regulation change, so the upgrade is to claw some of that back.

Looking at one positive from last weekend is that Seb appears to be getting a handle on things. Is that how you guys see it?
OS: Yeah. We always said it was going to take a bit of time and seat-time in our car and it's proving to be the case. He did a great job in Q1 and Q2. He made a mistake in Q3, ended-up tenth and got a lot of seat-time in the race as well and it looks like in FP1 here, he's continuing to get to grips with the car. He still wasn't happy with the balance after the race. And as Seb says, "the speed of the car is one thing - but I've got to get the balance right and get comfortable in it and I'm still not quite there yet". Hopefully this race will take another step towards that.

Well, if he does take another step. What are the goals for this weekend - and does your performance at this track last year give you some confidence?
OS: Yeah, it's a track that suits our car a little bit more than Portimao, for example, and if we do a good job between now and qualifying, having a chance to get both of them into Q3 would be beneficial and successful.

Guenther, both drivers saw the chequered flag in Portugal, and Mick in particular had a great race, overtaking Nicholas Latifi. How much confidence will that performance give Mick?
Guenther Steiner: Difficult to say. I mean, this morning it was not good, very difficult session for us for both cars but, you know, I think Mick for sure was happy after the race in Portimao, with his performance. I think that is the best we can do at the moment and he got everything out of it.

And was that his best performance of the year so far, for you guys?
GS: Yeah, I would say so. Absolutely. You know, he's learning the car, he's getting better and better accustomed to Formula 1 and I think hopefully it will continue, this understanding of Formula 1 and improving race to race.

There was a little bit of a disagreement yesterday between your drivers about the car. Mick said that he'd made a step forward - the car had made a step forward - in Portugal, while Nikita disagreed with that, saying it hadn't. What's the story?
GS: I think I wasn't here, so I want to hear that story as well, about the disagreement. I think Mick maybe can adapt more, or quicker to what the car is doing. I mean, we all know the car is not very good, and we always said that, so as much as my colleagues here are struggling, I wish I would have one of their cars. In the end, I think Nikita, we just need to try to get him a better balance as well. So the deficiencies of the car, to overcome them a little bit, the car is very unstable in turn-in and I guess Mick maybe can manage that one better and Nikita struggles a little bit more, because he wants the rear end, just to be confident that it sticks. So, it's one of the things where we need to try to get Nikita into a better spot, that he feels more confident - because if he has no confidence in his cars, it's very difficult to drive them, because, you know, the speeds you are going, it is not easy, so that is what you are trying to do.

One of your cars beat a Williams last weekend. Is it realistic to think you can do that at most races?
GS: No. I mean, as long as we can take the fight to them, we are happy to be honest, you know. For sure we will try, I always said we will try to achieve something. You cannot come here and do all this work and not try to fight anything. For us, it was a good moment. Even if it is for little things we fight for, you need to keep on doing and improving. The drivers learn in a race like this for sure. Mick learned a lot about racing in Formula 1 because before we were always behind and just making laps basically - which helps as well - but if you start to fight, if you fight for more, at least you have done it in the back end.

(Luke Smith - Autosport, via email) Franz, it's for you. At the last F1 Commission meeting, AlphaTauri sided with Red Bull and Ferrari and opposed sporting penalties for procedural breaches of the Financial Regulations. Mattia Binotto said that Ferrari wanted more clarity on the rules before it could vote in favour. Could you outline and explain AlphaTauri's position on this matter please?
FT: It's quite clear. It is a change during the season and what we requested is simply a clarification. We wait now until the FIA will come up with this and then we will decide how to continue. I don't want to go into details because, as you know, this is confidential contents - but AlphaTauri, as you know, is absolutely not against cost cap or against any amendments for the cost cap - but it has to be done in a proper way and we simply need to define in detail what the FIA wants with this and therefore we requested for this clarification.

(Dieter Rencken - Racing Lines) To all three along the same sort of lines. Last week, just before the Portuguese Grand Prix, Zak Brown published a letter in which he suggested certain teams were voting in block with their engine suppliers or technical partners or whatever. Where do you three stand on this matter? All three of you are aligned in some way or other to another major team? Where do you stand in this regard please?
GS: I think we vote for the best of Haas F1 always. Obviously, when it goes in line with Ferrari, voting with them helps us, we vote that one. For us, the example is like the question asked before about the penalty, the sporting penalty for exceeding the budget cap, we voted for it. We are under no pressure. Obviously we speak with Ferrari all the time, we work with them - but we are not obliged to do what they say and building this racket basically. I think for us, most of the time, it is beneficial to vote with Ferrari, for obvious reasons but it isn't always like this. We are still free to do what we do - but we do the best for Haas F1 - the majority of the time goes with what Ferrari is doing. That is our position on that one.

And Franz please
FT: We vote what's in the favour of Scuderia AlphaTauri.