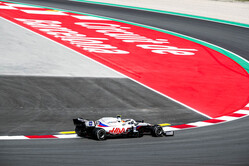 The fourth round of the 2021 FIA Formula 1 World Championship began with practice on Friday at Circuit de Barcelona - Catalunya, Spain as teams prepared for Sunday's Spanish Grand Prix.

Both Mazepin and Schumacher began FP1 with a baseline outing on the Pirelli P Zero White hard tire before switching to the Red softs where they set their respective fastest times of the session. Schumacher logged a 1:20.766 to place 18th while Mazepin ran a best of 1:21.976 for 20th. Valuable time was then lost off the clock thanks to a red flag stop to recover the beached car of Alfa Romeo's Robert Kubica. With just under 10 minutes remaining Mazepin and Schumacher returned for some high-fuel running on the soft and hard tires respectively.

FP2 started with a preliminary excursion for both drivers on the Yellow medium compound for the first time. Swapping onto the soft rubber for their qualifying simulations, Schumacher set a 1:20.326 lap for 19th with Mazepin recording a 1:20.753 for 20th on the timesheets. High-fuel stints with pit-stops concluded the afternoon's track running for Mazepin and Schumacher.

Nikita Mazepin: "I think the track was improving with the sessions, obviously turn 10 is a bit new, which means the tarmac is very black so there's still some dust and oil in it - it's getting more rubbered in with the more laps we do. Again, it's a Friday, so there are three free practices and we have one more to go tomorrow. I always learn when I'm out but so far, my weekend starts where I'm three steps back from where I used to be driving different cars, and then slowly I make the steps forward. If I end up one step ahead from where I wanted to start, I think that's a good day for me - it was no different today."

Mick Schumacher: "It was alright, a bit tricky here and there, but lots learned today and definitely a lot to try and improve for tomorrow. It seemed like the hard tire was the most difficult tire to switch on, it looked the same for everybody else, so we quite quickly switched to the soft tire in FP1. I would say the progress through the day was quite positive, there are little things we have to improve, and can improve. Looking at it, we were quite quick on the straights, but we're struggling a bit to find the downforce we want - but that's what we have and we'll have to work with it."

Guenther Steiner: "It was a pretty difficult FP1 starting on the C1 hard tire for both drivers. Obviously, Nikita (Mazepin) was hurt more as he spun - there was very little grip out there on the C1 which didn't give him a lot of confidence going forward. They had to readjust everything when they put on the softer C3 tires. I would say we made some progress in FP2, for ourselves, not necessarily on the timesheet - we can read that one ourselves. We made progress, I think we're slowly getting there, and this was only really possible because we had more than 100 laps today without any real issues. We have to keep on working and hopefully in FP3 we'll find a little bit more and be ready for qualifying. At the moment I wouldn't say we're ready for qualifying, but everybody will be working hard to get there."