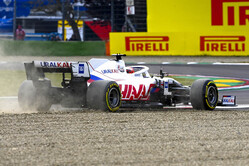 Both drivers took the Pirelli Cinturato Blue full wet tires for the start of the 63-lap race owing to a downpour during the build-up that left the first sector of the circuit fully soaked. Schumacher gained two spots to hold 16th while Mazepin's VF-21 escaped unscathed after Williams' Nicholas Latifi made contact along the backstraight. Schumacher was caught out by the conditions under the ensuing safety car period and spun into the wall along the main straight but was able to pit for repairs and re-joined the race on Green intermediates, one spot behind his team-mate. Mazepin came in on lap 14, following suit by taking on intermediates, and soon the track dried sufficiently for slicks. Schumacher stopped on lap 22 for Red soft tires while Mazepin boxed three laps later.

The race was halted on lap 33 owing to the debris left in the aftermath of a large collision between Mercedes' Valtteri Bottas and Williams' George Russell into Tamburello. Both Schumacher and Mazepin took on Yellow medium tires for the rolling restart and retained position through to the checkered flag, with Schumacher 16th and Mazepin 17th, logging Uralkali Haas F1 Team's first double finish of the 2021 campaign.

Nikita Mazepin: "So much happened in this race, from starting on the wets having not really expected it as the sunshine wasn't long before the start, then a red flag and loads of things basically happening. We just weren't really fast enough today to fight with others. It was a good learning experience in the bag though and to see the checkered flag was good. I don't think Nicolas (Latifi) knew I was there when he came back across the track. I gave him all the room I had but I just don't think he was aware that I was there. I think it was just unfortunate for him. I don't think anyone had an easy one today, but I guess it was a very exciting race for the fans."

Mick Schumacher: "It was my first time in a Formula 1 car in the wet conditions - it definitely wasn't easy. To be honest I wasn't quite sure what happened at the moment I spun, it went quite quickly. I don't know if I was too aggressive or if it was a puddle or whatever. It's something we'll analyze but I'm quite disappointed in myself. We'd had good position up until then. Overall, I think it was a positive race, we finished 16th and we were good in terms of pace. We saw the checkered flag and that was the goal."

Guenther Steiner: "We got two cars home in what was quite an eventful race with the changing weather conditions. There were a few things thrown our way again but ultimately, we recovered and finished the race with both Nikita (Mazepin) and Mick (Schumacher) at the checkered - which is good. That's what I always want, that we do the laps, and that the guys learn. I want them to keep improving and especially for Nikita, it was good today that he finished the race after missing out in Bahrain. He now has a complete race under his belt. Mick did well to recover from the earlier part of his race. As much as it's not the result that makes you happy, what makes you happy is that we made progress. That was our plan, and if we can continue to work like this - with less mistakes and more performance, that's what we're here for this year."