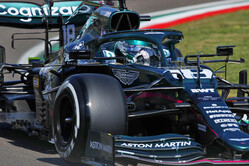 While Aston Martin previously appeared to rein in on its threat of possible legal action over the 2021 aero rules, Otmar Szafnauer admits the matter is far from settled.

At the start of the Emilia Romagna weekend, as it became clear that Aston Martin - and good friends Mercedes - were most affected by the aerodynamic rule changes - introduced ostensibly in the name of safety - team boss, Otmar Szafnauer warned of possible legal action.

In Bahrain, Lewis Hamilton had suggested that the new rules were an attempt to handicap Mercedes.

"It's no secret... they've been done to peg us back," said the Briton in the moments after missing out on pole position to Max Verstappen. "We had the changes of course last year to our engine to do the same thing," he added, a reference to the rule forbidding changes to engine mode changes between qualifying and the race introduced late last season. "But that's OK, we love a challenge and we don't look down on these things, we just work hard to be the best we can. And that's what we'll do."

Previously, Toto Wolff had echoed similar thoughts, the Austrian claiming that changes to the floor, diffuser and brake ducts meant that those teams running low rake were losing as much as a second a lap to those with high rake.

"I think we've probably suffered more with the change of regulations than the cars with the higher rake," said the Austrian, who confirmed that Aston Martin, which also utilises a higher rake, was similarly suffering, a fact confirmed by Otmar Szafnauer.

Szafnauer subsequently called for the aero rules to be revised, admitting that legal action cannot be ruled out. He also argued that the lines appear to have become blurred in terms of the FIA and the sport's Commercial Rights Holder, stating that Formula One Management should not be involved in rule making, albeit for 'safety purposes'.

Referring to F1's influence on the decision to change the rules, he said: "The regulation change that was made for safety reasons, that kind of governance rests solely with the FIA. When pushed harder on what influence F1 bosses might have had on the changes, he said: "Like I said, I think that type of regulation change rests solely with the FIA. They're the experts."

Asked, should it get no satisfaction from the FIA, whether Aston Martin would consider legal action, he replied: "I think we get to that point after the discussions. It's hard to predict. I think the right thing to do is to see what can be done."

Having met with the FIA over the Emilia Romagna weekend however, his attitude appeared to have softened.

"We've had a couple of meetings with the FIA, and I think we're - at this point - pretty satisfied that all the correct steps were followed," he said. "We're still in discussion... we're just trying to discover what all the steps were, you know, to make sure that it was done properly and equitably. So that's the reason for the discussion."

Asked for further insight, he replied: "We're still discussing with the FIA. I'll be able to answer that question probably in three, four days' time."

Over the Barcelona weekend however, when asked where things stand with the FIA and whether there was any hope of a change to address the consequences of the rule change, he said: "We had good discussions with the FIA to understand the process and how we got to where we got to. The discussions have almost come to an end. I think we made good process to have a better understanding of what transpired."

When it was suggested that it is unlikely that the rules will revert to what they were before, and, therefore what did he hope might be the outcome, Szafnauer replied: "Well, for us, what we have to do now is, we have to work hard to make up the deficit that was introduced over the winter.

"We have a new package here on both cars that was introduced in Portimao - but Portimao, the nature of the circuit is a lot of low-speed corners, so we'll be able to evaluate what we've done here and we have to work hard to bring even further upgrades later on in the year to get us back to the performance levels that we had last year."

At this point, AlphaTauri's, Franz Tost interjected: "We all know the process when a new regulation is coming in and this new floor regulation was fixed last year and was agreed by all the teams.

"It was sanctioned by the Formula 1 Commission and the World Motor Sport Council," he continued, "and therefore I don't see any chance that this regulation can be in the short term changed. Then it is up to the teams to interpret the regulations the best possible way and get the most out of it."

"I think there is not a lot to add," agreed Guenther Steiner. "The regulations they were changed, it was voted. I don't know the detail of what was requested for and it wouldn't make a lot of difference to us anyway.

"Just for the record, it wasn't voted," argued Szafnauer, "it was done on safety grounds and it was unilateral."

"No, it was fixed," insisted Tost. "The Technical Working Group later...

Asked to clarify what he'd said about the objection from the three teams in the indicative vote and what the Technical Working Group did and whether Aston Martin objected to the rule changes, Szafnauer said: "Yes, we did.

"We objected on the basis that they were more favourable to high rake cars actually and we objected to that and then proposed other regulations that would be more equal. The vote in the Technical Advisory Committee is just indicative and it was seven to three at the time."

Bearing in mind that Aston Martin hasn't had a high rake car with which to compare how the rule changes have actually impacted it this season, Szafnauer was asked how the team is so certain that this is the case.

"We developed a high rake car for many, many years," he replied, "since the high rake concept started with the blown floor, and we were one of the only ones, actually the only one, to change from a high rake philosophy to a low rake.

"So we've got the ability internally, through both CFD and doing tunnel runs, as well as having the experience of both, to have a look at the changes and to be able to determine if it is more detrimental to one philosophy than the other.

"Which is exactly what we brought up in August of last year and we were, I think, proven correct.

"As for statistically not showing that, if you just look at the last race, without the pit stops for Mercedes, for example, I think Lewis was 34 seconds ahead of Max at last year's Portimao and had they not had the pit stops at the end to try to get the fastest lap. I think this year it was four seconds in it.

"So they lost 30 seconds in one race to a Red Bull. And we too. If you look at our times, where we finished, we too were about 30 seconds behind from where we were last year. Just look at the first three races. Look at both qualifying as well as race results."