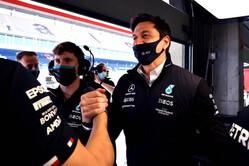 Race director, Michael Masi has admitted that a radio call from a team boss during a race is a rarity, while the broadcasting of the message is a new innovation from F1.

Whether he will take to social media to vent his anger and frustration remains to be seen, but on Sunday afternoon Tot Wolff joined that happy band of fans critical of Nikita Mazepin's every move.

Of course, the Austrian had good reason to be frustrated with the Russian, for, as is his wont, the Haas driver was holding up Lewis Hamilton despite repeated blue flags.

"Michael, blue flags!" cried Wolff over the radio. "Michael this guy makes us lose the position."

The Russian, who according to the usual critics on social media would be better served spending his Sundays playing online casinos, subsequently moved aside, finishing the race two laps down on the leader.

While it is not unusual to hear team bosses over the radio, broadcasting of their calls to race control is.

"To be fair, I very rarely hear from Toto on the race control radio," admitted race director, Michael Masi after the race.

Indeed radio calls to race control are not usually broadcast, but this weekend F1 and the FIA have agreed to the innovation in a bid to allow fans even greater access to what is going on.

"It actually came about through a discussion at the F1 Commission meeting last year," explained Masi. "So viewers could hear a part of the broadcast - the communications between the pit wall and the teams - which is the regular part of what we do operationally.

"The F1 Group through their broadcasts, has been doing some trials in the background and seeing what that looks like," he added. "And all the teams were advised, and this weekend's the first time it’s gone live to air."

Hands up all those who'd like to hear more of Guenther Steiner's radio calls.