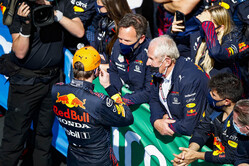 Losing out to Lewis Hamilton and Mercedes yet again, other than better strategy Max Verstappen calls for a faster car.

If the 2021 Spanish Grand Prix were to be encapsulated in one radio message, it would surely be that moment, following Lewis Hamilton's second pit stop, when Christian Horner dejectedly told Mas Verstappen; "it's Hungary all over again".

The Red Bull team boss was referring to the 2019 Hungarian Grand Prix, when Mercedes made the late decision to switch to a two-stop strategy for Lewis Hamilton, and failing to respond to the move Max Verstappen subsequently lost out to the Briton.

Once again, in Spain, despite Verstappen's bravura move at the start, Mercedes caught its rival on the hop, for failing to pit Verstappen directly after, it soon became clear that the race was lost as it was only a matter of time before the world champion would reel his prey in.

"In a way I could see it coming," said Verstappen at race end. "Already at the end with the softs he was faster and when we put on the mediums he had a lot more pace, he could just stay within one second, so there was not much we could have done.

"They went for another stop and then I knew it was over," he admitted. "I was already struggling with the tyres and he was just getting closer and closer, so I was a bit of a sitting duck."

Asked if it was always the plan to do a one-stop strategy, Verstappen said: "When you are in the lead with the cars behind, with traffic and stuff, you don't want to pit into traffic. But of course it makes it a lot easier when you have a clear advantage, more pace in the car. So for us of course if we would have jumped for another stop I'm not sure I would have caught up again."

Referring to the Barcelona weekend in general, which saw him miss out on pole by 0.036s, he said: "It shows that we are not there where we want to be. We still have to push hard and catch up because at the moment we are a little bit slower. But still nevertheless, compared to last year it has been a big jump forwards for us.

Asked about the similarity to Hungary 2019, and what Red Bull needs to do to ensure there are no repeats, Verstappen was adamant.

"(We) just need a faster car," he said. "It's very simple. Then you don't need to get into a situation like that. That's what we have to focus on."