No further action over Alonso/Stroll incident 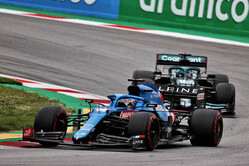 The Barcelona stewards have opted to take no further action following the incident which saw Fernando Alonso appear to force Lance Stroll off track as they battled for tenth position.

Stroll was making a pass on the Spaniard on the outside of turn 1, and Alonso, who was on older tyres, moved as far as possible onto the apex kerb, but was unable to hold the car's line.

The stewards determined that throughout the incident Alonso took all appropriate action to try to avoid Stroll, but was unable to do so, forcing car him off the track.

Both drivers agreed that this was a racing incident and the stewards concurred, opting to take no further action.

As a result of the incident, Stroll was forced behind the apex kerb at Turn 2. The Canadian explained to that he steered to the left towards the bollards at the
exit of turn 2, which was apparent from the in-car video.

He then drove over one of the lateral kerbs behind turn 2 and the momentum and speed over the kerb forced him to the right. Even after this, Stroll continued to try to steer left.

The stewards were satisfied that Stroll made every attempt to steer around the bollards until it was not possible to pass behind them, while Alonso, who was in the hearing, agreed that this was the case.

Having not passed behind the bollards, Stroll then rejoined the track safely and deliberately slowed and let Alonso and Bottas, who was lapping them both, pass, eliminating any possible lasting advantage.

Again, the stewards opted not to take any further action.

"It wasn't where we wanted to finish today," said Alonso, "but I think the weekend in general was positive.

"We had some good performance from the car, and we are definitely heading in the right direction.

"In Portugal we were fast, but we didn't know if it was specific to that track, so our progression this weekend shows we are in a good place.

"We had some fun battles today and I enjoyed the racing, but we just couldn't hang on in the end with the medium tyres."

"It is a bit frustrating not to get the point at the end," admitted Stroll. "We raced hard against Fernando and the moment at Turn 1 was a racing incident: I braked deep into the corner and he was late on the brakes. We made some contact and he pushed me wide.

"This weekend has helped us continue to learn and improve the car. We will keep pushing to unlock some more speed before Monaco."