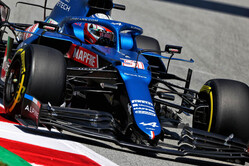 Alpine F1 Team will line up with Esteban Ocon in fifth and Fernando Alonso tenth for tomorrow's Spanish Grand Prix, after the closest qualifying battle of the season around the Circuit de Barcelona-Catalunya.

Esteban secured his best qualifying position since his fifth place in last season's Styrian Grand Prix with the team putting both cars into Q3 for the first time since the 2020 Bahrain Grand Prix.

Fernando required two runs in Q1 to ensure he progressed to Q2 alongside Esteban. Both drivers recorded the exact same lap time with a 1min 18.281secs to finish eleventh and twelfth.

Fernando's first lap in Q2 was a 1min 17.966secs, good enough for seventh, with Esteban just outside the top ten in eleventh. Just one tenth split fifth place to thirteenth. On their second push laps, the French driver improved to a 1min 17.743secs, whilst Fernando aborted his lap, squeezing through to the top 10 shootout by 0.008secs.

Q3 was finely poised, and with two sets of fresh tyres Esteban went first, stamping his A521 into a superb fourth position with a 1min 17.560secs, with Fernando in ninth on used Softs.

Esteban couldn't improve on his already impressive lap time on his final run, finishing fifth. Fernando's final lap was slightly hindered by traffic, crossing the line just in time to qualify in tenth position on the grid for tomorrow's 66-lap race.

Esteban Ocon: "It feels very good today and I'm happy with how we managed today's qualifying session. I think this is the confirmation we were looking for, as we've repeated the speed we had in Portimao at this track, which is good. The car has been great this weekend and I'm feeling very good at the wheel with the team around me. The factories are working hard to keep finding improvements and their hard work is paying off. Tomorrow will be a hard race and strategy will be interesting."

Fernando Alonso: "It's been a good weekend so far as we are in the top ten again, the second time this season. It shows the progress of our car so that's good. In terms of the session today I think my out-lap in Q3 was a little messy, so there was more time for me to find. It's very tight and obviously very difficult to overtake in the race, but we'll try to have a good first couple of laps and see where we end up tomorrow as anything can happen in a race."

Davide Brivio, Racing Director: "It was a very good qualifying today with Esteban fifth, the best result of the year for us so far and Fernando also inside the top 10. We're happy to have both cars in Q3 for the first time this year. The drivers are working well with their engineers in setting up the car and finding a good balance and even finding some small, but important, improvements from FP3 to qualifying. It's a credit to everyone in the team who has done a good job this weekend. We want to keep the momentum going and capitalise on these good starting positions in tomorrow's race."