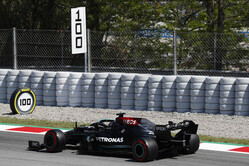 Not usually one for statistics and records, Lewis Hamilton admits to being "humbled" and "ecstatic" as he reaches an F1 milestone that may never be equalled.

To put things in perspective, the second most successful driver in terms of pole positions is Michael Schumacher with 68, while in the entire 72 seasons of Formula One, only five teams have scored more than 100.

"It's really down to the men and women back at the factory who are continuously raising the bar and just never giving up," he said.

"The support that I have... it's been a dream for me to work with these guys and the journey we have been on has been immense. Who would have thought that at the end of 2012 when we made the decision to partner that we would be qualifying at 100. I feel very humbled, very grateful. I'm ecstatic, like it's my first."

Asked what reaching the historic milestone means to him, he admitted: "It's always difficult to assess in the moment... but wow!

"I've been racing a long time and the 100 mark is something I don't think anybody, and particularly me, thought I would ever get to that number.

"But when I think about it I just think about all the people that have helped me get there. It's not only the amazing team I have here but it's also the incredible group of men and women back the factory, at both factories, who just never cease to amaze me, who continue to raise the bar. There are so many people we don't get to see each other all the time but we are connected. There are these great debriefs that we have but this journey that we have been on all these years has been remarkable and it's been so enjoyable and it's crazy that it is 100 and it felt like one of the first. That for me is even more special.

"There have been so many qualifying sessions, so many near misses, so many mistakes and so many moments of growth and I love how close it is between us all. I think that's great for the fans and I think that's exciting for me also. And also the people that are only just behind us."

Asked how this pole compared to his first, in Montreal in 2007, he said: "I would say very similar. I can't remember exactly the feeling in 2007. I think back then it was where I was pushing for equality in terms of fuel load alongside my team-mate, and the first time they gave us the equal fuel load... I don't know if people know but like 10 kilos of fuel here is worth over three tenths of a second, so if you're carrying an extra lap or so of more fuel that's a tenth and a half or so.

"That was special and kind of felt amazing firstly to reassure that I was able to do what I did back then and here we are 100 qualifying sessions or whatever it is, 100 poles, and I still feel as young. I'm good. Keep going."

Asked how this particular record compares to the many others he has set in the sport, Hamilton admitted: "I don't really feel like I can compute it right now. It's a huge number. It's difficult to say, really.

"I don't know how I'm supposed to feel," he continued, "but as I said, I'm excited that it was so close and it felt amazing to... qualifying's so special, when you come across that line and you find out you're just ahead and you're thinking 'OK, how am I going to squeeze out more, will the other guys find a tenth or two or three on the next run or none at all'. It's nerve wracking, I'm sure, for the fans and it's the same for you. It's such a big number that it's hard to express just how crazy it is and amazing it is but I don't really know what else to say."