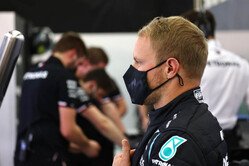 While insisting that only a bout of the flu will keep Valtteri Bottas out of his Mercedes seat this season, Toto Wolff follows the Finn's example and takes a swipe at Red Bull.

Though Valtteri Bottas hasn't entirely convinced this season, only a British tabloid could claim that the Finn was to be dumped mid-season by another driver - a Briton, naturally.

Earlier this week, the Daily Mail, taking time out from its sidebar of shame, suggested that - according to sources - Bottas was to be replaced by George Russell.

At the start of the Barcelona weekend the Finn was asked about the story.

"I know that I am not going to be replaced in the middle of the season," he replied. "As a team we do not do that.

"I have a contract for this year, and I think there is only one team that does that kind of thing in F1 and we are not that," he added, a clear reference to Red Bull.

"So no pressure from my side, as I know how things are," he insisted. "There is always bullshit around but that is part of the sport."

Asked if he could categorically confirm that Bottas will be in the Mercedes for the entire season, Wolff told Sky Sports: "Absolutely... unless he gets flu and can't drive, he's going to be in that car.

"I see no reason to change. It's these guys over there that like to play musical chairs," he added, pointing to the Red Bull motorhome, "so no change expected.

"If you are not happy with your wife and you start to already look for other ones, it's not going to improve the relationship.

"I try to work on the relationship with my driver and achieve the best result for him before I'm starting to flirt with someone else."