Bottas hits out at media and Red Bull 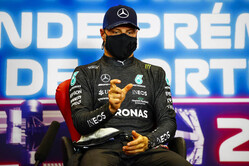 Valtteri Bottas - seen here evaluating his chances of being retained for 2022 - has hit out following reports in the UK media that he could be dumped by Mercedes "mid-season".

Following another unconvincing performance during last weekend's Portuguese Grand Prix, sections of the British media did what they do best, sh*t-stirring.

It was claimed that "according to well-placed sources", Mercedes was looking to drop Valtteri Bottas in the coming months and bring in George Russell.

While hitting out at the report, the Finn also took the opportunity to take a well-aimed swipe at Red Bull.

"I know that I am not going to be replaced in the middle of the season," he told reporters at the start of the Spanish Grand Prix weekend. "As a team we do not do that.

"I have a contract for this year, and I think there is only one team that does that kind of thing in F1 and we are not that," he added, a clear reference to Red Bull which has an (ahem) certain reputation for mid-season driver changes.

"So no pressure from my side, as I know how things are," he insisted. "There is always bullshit around but that is part of the sport."

During last weekend's race, having lost out to teammate Lewis Hamilton and then Max Verstappen, at one point Bottas was urged on by team boss, Toto Wolff, which some have taken as a sign of the frustration within the team.

As the title battle with Red Bull hots up, Bottas is convinced that he can - and will - play a central role.

"I think if we were a clear step ahead and the gap between the drivers could be big, you could still do good results," he said. "But this year obviously, it is really clear, if you are lacking a bit of pace you can easily drop one or two places.

"I think that is how it should be," he added. "So if I aim to do my job as well as I can, hopefully it would be very visible and the talking will stop pretty quickly. That is a good thing."

Indeed, the Finn remains convinced that he can still aim for the title.

"There are still twenty races to go which is a huge amount of points, and I am definitely not giving up on the goal for this year. I believe that hard work pays off, so I will keep working hard and keep believing. I know that the results will come and it will pay off."