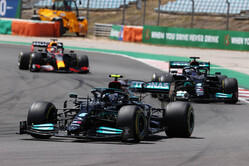 Lewis completed a hunter's drive to record his 97th victory in F1, after dropping to third following a safety car restart. Valtteri finished in P3 and secured the bonus point for fastest lap. An exhaust sensor failure cost the Finn precious power and the opportunity to close in on P2 late in the race.

Lewis Hamilton: That was such a tough race, physically and mentally, just keeping everything together. It was very windy out there, obviously, so it was easy to put a foot wrong. I didn't quite get as good a start as Valtteri, then lost out on the restart which was not good. I was not happy about that, naturally. But that race was satisfying, when you're in third and have to overtake two amazing drivers - amazing! Having races like that is what I live for.

The gap between us all is so close and every single point is going to count this year. I love the battle, I've loved it since my days in karting and as a team, we can't leave any stone unturned - we've got to continue to push this car, squeeze everything out of it.

Valtteri Bottas: Obviously not what I was aiming for today because when you start from pole, you want to bring home the win. I think ultimately the main issue was the first stint - I was struggling for pace and I still don't understand why. The warm-up with the hard tyre was slow after the pit stop and Max managed to catch me. Then we had an exhaust temperature sensor issue later in the race which cost me speed on the straight so it was difficult to close in on Max and fight for P2. Eventually the power came back and I was able to set the fastest lap which could be an important point.

We need to analyse this weekend over the next two days, learn the lessons and then focus on next weekend - we go again.

Toto Wolff: Absolutely stunning drive from Lewis and it seemed under control all through the race. You could see, and hear in his voice, how much he was pushing. An incredible drive. Valtteri had some real pace at the beginning and you could see that it was difficult for Lewis to catch up, it was real speed. But then eventually Lewis managed to get past and off he went.

The exhaust sensor issue was unfortunate for Valtteri later in the race because he really caught up well to Max and then it kind of stabilised at 1.5/1.6 seconds, but he had more to come at the end of the race. We couldn't override the faulty sensor so the engine went into protection mode and that cost him 5 seconds. Valtteri probably would have had a shot on Max at the end if we were not to let him down on the power unit. I think we need to give him credit.

When we were behind in testing and in Bahrain, it's a buzz that I have not felt in the Team since 2013 when we had that first sniff that we could be there. The whole place is excited and continues to be excited. I'd like to be happy after Abu Dhabi at the end of the season but for the time being, we'll take it one step at a time.

Andrew Shovlin: A really impressive and well-deserved win from Lewis; two solid overtakes to take the lead and he controlled it from there to the finish. Valtteri did a good job at the start and the restart but seemed to be lacking a bit of pace on the medium which allowed Verstappen to get within undercut range. That, together with a moment at turn 4, allowed Max to pass. Valtteri had strong pace on the hard tyre and we thought he was going to be able to take the position back from Max until an exhaust temperature sensor put an end to our hopes. As a consolation, he was able to pull enough time on Perez to earn a free stop to go for fastest lap. We'll review the timing of our call as we opened the window for Red Bull to also have a go and had it not been for Max's mistake at T14, we'd have lost a valuable point to them.

Overall, we can be pleased with the result this weekend, we've consolidated our lead in both championships and we had good pace on low and high fuel. However, the margins are super fine and it's a reminder that we need to get everything right to beat Red Bull. We've got a difficult race next week in Barcelona; it's a tyre overheating track like Bahrain so we'll be using the next few days to prepare ourselves for that challenge.