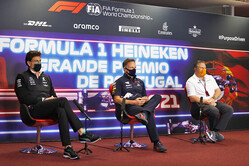 Q: Zak, you published a letter yesterday outlining what you feel needs to happen to continue Formula 1's growth. Why did you feel the need to write that now?
Zak Brown: Well, I think Formula 1 is on a great trajectory. Liberty has done an excellent job since they have acquired the sport, of continuing to move us forward. We have a variety of new agreements in place, which I think are all much better than they have been previously - but I think we still have a long way to go. I'm excited about all the opportunities Formula 1 has ahead of it - but I think it's important as CEO of McLaren and very committed to the sport that we put out there our opinions on what we think is in the best interests of the sport, to ultimately grow the sport, to get more fans, which will have more countries wanting races and more sponsor partners etcetera. So, I though we'd lay out what I see as a handful of issues that still need to be discussed and addressed.

Q: And what sort of response have you had from teams?
ZB: I've had a lot of positive response from our partners, fans. I've not spoken with many of the teams specifically about it. Those various topics, I've spoken to the majority of teams on over the last two, three, four years and I would say, a lot of support for various agenda items in there. Certainly I'm sure not unanimous because of the interest all of the individual teams understandably have - but that's why I think we need to change some governance to put a little bit of power back in the hands of people that are exclusively working in what's in the best interest of the sport - because it's understandable teams will always try to work as hard as they can to retain what they perceive to be some sort of competitive advantage.

Q: And just looking at your on-track performance Zak. Great to see Lando going so well, at Imola in particular. Daniel seems to have struggled a little bit more. What are his issues?
ZB: I just think he needs a little bit more time in the race car. Winter testing was cut in half this year. We had the disadvantage, if you like, of having to change power units. So we had to learn, that was a very smooth transition, Mercedes was very well-prepared and easy to work with, so that went seamlessly - but we did have to spend some time on integration. So I think he just lacks a little bit of seat time. We're only two races into it, so I'm not worried whatsoever.

Q: A question really for Toto and Christian now. It's so tight between Max Verstappen and Lewis Hamilton. They're only separated by a point for fastest lap. Is this battle upping the level of intensity for both of them?
Christian Horner: I think it's... look, we're two races into a 23-race calendar, so it's fantastic the first two races have been as close as they have and I'm sure for all the fans and followers of Formula 1, they'd love to see another 21 races like the first two have been. I think that adds, hopefully, an additional pressure and it's going to be interesting to see how it pans-out. I think it's far too early to get a clear statement of form at the moment. That's going to need another couple of races but by the time, I think, when we get to the end of Barcelona, we're going to have much more of a clear pattern. I think the main winner out of this will be Formula 1 if it is a true head-to-head contest between the two teams.

Q: Toto, your thoughts?
Toto Wolff: Similar sort. I enjoyed - and all of us in the team enjoyed - the first two races. With all the glory and the drama narrative, that is interesting, and we've seen a good momentum. Particularly the audiences have grown and the interesting target groups, because there is excitement, not only at the front. You can see that in qualifying, times are pretty close and probably Lando could have been part of the top three if not for the mistake, so overall very exciting.

Q: The Constructors' Championship is tight as well, only seven points between your teams. It could be decided by the fortunes of the drivers on the other side of your garages. How important do you see the roles of Checo and Valtteri?
TW: This first free practice was a good example of how important it is, because feedback on the two sides of the garage was similar but not as, let's say, bad on one side versus the other one. And you can see that the car... Valtteri has done a tremendous job in also setting the times during the sessions. I think qualifying went particularly bad for him in Imola but we know that he can do these laps.

Q: Christian?
CH: Well both cars obviously score so it's important to have both as high up as you can. I think with Checo finding his feet within the team, he started well, he drove a great race in Bahrain, qualified extremely well in Imola. Sunday obviously didn't go his way - but I think as he becomes more familiar, he's starting to play a stronger and stronger role within the team and, of course, the technical direction. He brings a wealth of experience and knowledge as well so, yeah, Formula 1 is still very much a team sport.

Q: Christian, this one's for you. I'd like to ask you about the appointment of Ben Hodgkinson as technical director of Red Bull Powertrains. Why Ben?
CH: Well, obviously we've done our research. I think setting up the powertrain facility on campus, within Red Bull in the UK, you don't have to look very far to see obviously the talent that there is, certainly based within the UK and, of course, the outstanding job that Mercedes have done, not just during the last seven years but the last 15 years in reality. And I think this is the first serious engine facility that's been set-up in the UK, other than HPP maybe in the last 50 years. So, it's a tremendously exciting opportunity and for us it's a matter of identifying the right talent, attracting that talent, exactly as we did with the chassis side. Obviously, proximity within the UK as well is very convenient for that. So having identified the right guys, Ben was a standout-candidate for us and we're delighted that he accepted our offer and decided to join the team.

Q: And to be clear, is this you committing to building your own Red Bull engine for 2025?
CH: I think it's a very clear statement of intent that we're obviously investing heavily within the facilities on campus. It's probably the single biggest investment that Red Bull have made in Formula 1, certainly since acquiring the team from Jaguar back in 2004. It's a great commitment and of course we're gearing up to take on, embrace whatever the new regulations are for, whether it be 2025 or 2026.

Q: And Toto, is this an unsettling time for Mercedes, with James Allison about to stand down as technical director, Ben now leaving HPP?
TW: Well, I think the right strategic steps have been, as far as I can see, set in motion from Red Bull. I think they are going dual track with their own power unit and maybe with a new OEM joining in, and that's certainly intelligent and the arrangement that has been found with Honda in the carrying over the IP is also clever. It's clear that they are going to hire English engineers because it's in the United Kingdom and there is not a lot of companies that can probably provide those engineers. So absolutely understood what the strategy is.

Q: (Andrew Benson - BBC) Toto, I wonder if you could explain the thinking behind the way you handled the situation between George and Valtteri after Imola. On the one hand, I wondered whether there was a risk George might be left in a slightly confusing situation with regard to what's expected of him on the race track, in the sense of, don't you want him to be out-performing his car and other drivers. It's hard to imagine a 23 year-old Lewis Hamilton not going for that move - but equally, was it a chance for you to lay down some ground rules for him before he gets into a Mercedes full-time?
TW: I think I want most of it to stay confidential because I had discussions with both of the drivers. Drivers have to go for a gap. Sometimes it's evaluating whether it's taking a risk or not. I guess that a young driver will always go for the possibility and nothing else is expected. The question is, is there enough reaction time to evaluate who is the other car? I think not. In a way, there is never 100% blame on one and zero on the other one. It's probably always much more nuanced and I'm really happy about the conversation that we had. There is no confusion on any side and there are no rules for any of the drivers. It's just us giving feedback.

Q: (Scott Mitchell - The Race) Question for Toto and Christian please. Tom mentioned Zak's open letter yesterday, one of the calls within that was to implement immediately secret voting through the F1 Commission rulemaking process, wherewith the idea being that team affiliations have got unhealthy and it would stop strategic alignment on voting. I just wondered what your respective opinions were on that please.
CH: I heard about that and I can only assume it's because of pressure applied from the supplier. If that is the case, it is a shame. McLaren are one of the most historic teams in Formula 1, they've always had a big voice. Certainly when I came into Formula 1, Ron Dennis was extremely passionate on every topic and had something to say everything that obviously involved the sport. So, it would be a shame to need to go behind a secret ballot - but a team has a right to request that. But it that's what it needs to take independent votes, then we don't have a major issue with it.

TW: Yeah, I read the letter this morning. I didn't know that Zak could write as presidential as he did - but it was a good letter overall. I think he addressed all of the important points. I really find it very positive that McLaren and Zak have expressed their opinions. Also, on controversial topics. I think it needs more outspoken-ness like Zak has done in this letter. I found it overall very good. In terms of the secret ballot, it's very easy. You have seen in the past that Toro Rosso has voted like Red Bull, probably without any exceptions, and Haas has gone the Ferrari way. In our case, we have never tried to influence a team. Obviously things have been discussed when it was a common topic, like on the power unit. It's clear that teams vote with each other and none of the teams would vote against their own interest in terms of chassis regulations. So, the idea of the secret ballot is good. I doubt that Franz is not going to take instructions, and neither will Guenther not take instructions but the attempt is obviously good: no team should be really being influenced by any affiliate or any supplier.