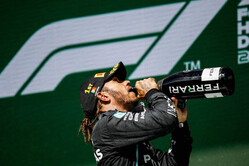 Never mind the 'new normal', as far as Toto Wolff is concerned, exceptional is the new standard for Lewis Hamilton.

Other than an admited "idiot" moment when he allowed himself to be caught napping by Max Verstappen in the moments after bthe safety car restart, Portugal - like Bahrain - was yet another masterclass from seven-time world champion, Lewis Hamilton.

Indeed, in the eyes of Toto Wolff, these exceptional, flawless performances, are pretty much standard now for the British racer that many consider the greatest of all time.

"It makes no sense to talk about these exceptional Lewis performances because they have been quite regular," says the Austrian. "It's his standard now, and I think he sets that standard to himself.

"We had a good race car," he adds, it was the first time we were really able to compete for pole. Maybe we were a tenth off.

"A good race car, but again, also very close to the Red Bulls, and he just drove an immaculate race."

At a time Jos Verstappen admits the title battle could get dirty as both drivers raise the stakes and and get a little more aggressive, Wolff insists that both are totally aware how costly a DNF could prove.

"I think they are not crossing the line on the track yet, because the risk of losing points is just too big,” he admits. "But it's going to go head-to-head, and certainly the rivalry may increase or not.

"I see Lewis completely relaxed about the situation," he adds. "He enjoys every bit working with the team and getting us up to speed because we weren't there."