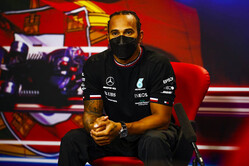 Toto Wolff: Back-to-back events bring some added intensity to the calendar, and they also mean we don't have to wait long for the next dose of track action. That's an exciting prospect after another close race last weekend in Portugal.

We left Portimao with a strong double-podium and some important learnings to take forward, especially as a one-two finish was in reach without the sensor problem for Valtteri in the late stages. There's plenty of work still to do and the pecking order looks set to change from track to track, so we know we need to be on the top of our game each weekend.

It's going to be a neck and neck fight with Red Bull through the entire season and we're excited for that battle to continue in just a few days' time in Spain.

Usually, we'd have already spent some time in Barcelona for winter testing, but that wasn't the case this year. So, we're looking forward to being back at the track and seeing how we fare.

The Circuit de Barcelona-Catalunya is a proper all-rounder, with a mix of corner types and straights, making it a true test for the car. It's a circuit where managing the rear tyres is key to strong performance, and that hasn't been our biggest strength so far this season. There have also been a few modifications to the layout for this year. So, we're intrigued to see how W12 performs there.

The Circuit de Barcelona-Catalunya features a wide range of corner types and speeds. Slow corners such as Turns 14 and 15 test mechanical grip, while the high-speed Turns 3 and 9 put aerodynamic grip to the test. This is what makes the circuit ideal for testing an F1 car.

Most of the low-speed corners at the Spanish GP venue are left-handers, while all of the high-speed corners are right-handers. So, slightly different set-ups are used on the left and right-hand sides of the car to accommodate this. Meanwhile, the left tyres wear out quicker and the right tyres experience lower temperatures.

Overtaking is particularly tricky in Spain - the 2020 event produced just six normal overtakes, while 25 were DRS-assisted. The only long straight is entered via a high-speed turn and it is tough to follow a car through there, as the car in front produces "dirty air". The end of the straight is also not ideal for overtaking, as Turn 1 doesn't require much braking energy.

The modifications made to Turn 10 for the 2021 Spanish Grand Prix will make it harder to overtake here, too, as the reprofiled corner has a shorter braking zone.

The changes to Turn 10 mean it now has a wider apex and exit. So, it'll be taken at a higher speed in 2021 - we still expect the corner to be taken in third gear, but the speed will increase from 85 km/h to around 110 km/h with the new layout.

However, regarding the balance with the new tarmac, a compromise will have to be found that also suits the rest of the circuit. So, getting this corner right will likely rely more on the drivers changing their approach and using set-up tweaks at their disposal like brake balance and DIF settings to help the car balance.

One of the most unique corners on the track is Turn 5, because drivers tackle the corner differently in Qualifying and the race. The camber of the road drops at the apex, unloading the inside-front tyre and increasing the risk of a lock-up. Drivers will take this riskier, tighter line in Qualifying as it is a shorter distance. But, on a race stint, locking up can cause vibrations and risk additional pit stops, so drivers often take the wider line to keep the load off the inside-front and reduce the risk of locking up.

Car balance in Spain can often be influenced by the wind, as it sometimes changes direction during the day. There is usually a tailwind on the main straight in the morning, producing a headwind into the high-speed corners. This provides good car stability. But the wind tends to rotate to the opposite direction later in the day, which gives drivers a tailwind into the fast corners and makes the balance trickier.

In terms of gaining lap time, sector three is the most important, as the drivers can find the most time in the low-speed corners. This means it is rare for a driver to set three purple sectors in Barcelona, because maximising grip and being quick in sector one will overheat the tyres by the time the drivers reach the crucial third sector.

22 of the 30 races that have taken place at the Circuit de Barcelona-Catalunya have been won from pole position - which proves just how crucial Qualifying is at the Spanish GP.

Barcelona has one of the lowest maximum speeds on the 2021 F1 calendar, with cars reaching just 322 km/h on the main straight due to its high-downforce nature, compared to Mexico, which has the highest maximum speed of 350 km/h.

Barcelona has the fourth-longest run from pole position to the first braking zone, with 579 metres before drivers hit the brakes for the opening sequence of corners.

The Circuit de Barcelona-Catalunya has the sixth-highest average track temperature in F1 at 40°C (calculated by a five-year mean). There are two main factors for this: The track surface in Barcelona is very absorbent to heat, but the solar radiation (electromagnetic radiation emitted by the sun) is also particularly high in Barcelona, so the track temperature increases quickly when there is no cloud cover.

Barcelona didn't host pre-season testing in 2021, the first time this has happened in many years. But the track is well-understood by the drivers and engineers, so we don't expect any additional unknowns for the race - and winter testing usually takes place in very different ambient conditions to the race, anyway.