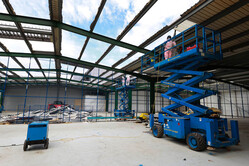 Tasked with developing competitive power units for Red Bull and sister team AlphaTauri from 2022 onwards, and charged with the creation of a new power unit to be developed to F1 regulations currently scheduled for implementation in 2025, Red Bull Powertrains has embarked on a recruitment programme aimed at building an expert technical team capable of taking its power unit operation to race and championship-winning success.

The senior leadership appointments include:

PU Production Director - Steve Blewett, formerly Head of Manufacturing at Mercedes Benz HPE, whom he joined in late 2010 from Williams.

The company also welcomes a new Head of Mechanical Development, whose name will be announced in the coming weeks.

"Red Bull's mission to bring all aspects of its Formula One operations in-house through Red Bull Powertrains is an enormously exciting undertaking but also an extremely demanding one," said Christian Horner, "and we know that success will only be achieved by bringing in the best and brightest talent, by providing them with the right tools and by creating the right environment in which they can thrive.

"Today's key leadership team appointments demonstrate our strong commitment to those goals and we certainly benefit from our campus being located in the UK where we have access to a huge wealth of engineering talent.

"Working with our new Technical Director, Ben Hodgkinson, and alongside key personnel retained from Honda Racing Development, each of the senior personnel announced today bring a wealth of experience, expertise and innovativity to the Red Bull Powertrains programme and provide us with the strongest possible technical platform for the future."

Asked in Portugal if he was concerned at others following Ben Hodgkinson's example and deserting Mercedes for Red Bull, Toto Wolff said: "I guess it was expected that this would happen and this is just a battleground such as the one on track. You need to acknowledge that and the last few weeks were certainly very much..."

"Pulling on...," continued Wolff. "How do you call that? Pulling on both sides of the rope, which I enjoyed. It's part of the competition. You need to take it as a sportsman. Sportsmanship."