Nothing is coming naturally, admits Perez 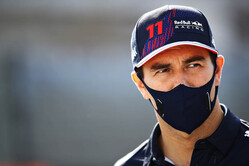 Not for the first time, a Red Bull driver admits that his car is not suited to his driving style.

It happened with Daniel Ricciardo, then Pierre Gasly and Alex Albon, and now Sergio Perez is discovering that the Red Bull appears to be built around the driver in the adjoining garage.

While the intense media pressure that Albon suffered has yet to emerge, there is no arguing that Perez' opening performances for the Austrian team have not been as impressive as had been hoped for.

Currently sixth in the standings, the Mexican admits that he is having to change his style of driving in order to adapt to the RBR16B.

"Everything that I used to do, very few things work in this car," said Perez as the Barcelona weekend got underway. "In that regard, I'm just having to adapt to a new style in the race, in qualifying, in practice with different fuel loads... everything has to be very conscious.

"At every corner, nothing is coming naturally just yet," he admitted, "but to be where we are, being that close at Portugal, I was very close in race pace so definitely we see good progress in that regard."

In his determination to get on top of the problem, Perez admits that he's had to resort to using his teammate's set-ups.

"I'm taking the approach of first I need to adapt to the car," he said. “We have had such limited track time with these cars this year, with the new rules of testing and also in practice, that everything happens very quickly.

"So it's very hard to do any work like we used to in practices when we had more time, now it's really a couple of runs and the day is over.

"At the same time I have a very strong reference in Max, he's obviously taking 110% out of the car from practice one all the way until Sunday, so I think first I need to get to that level and then move around.

"That's my view. It makes no sense to follow another direction because I'm just going to get lost, so I'm working in a very similar basis as my teammate."