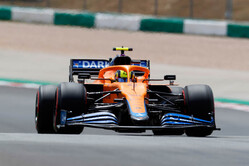 McLaren boss, Andreas Seidl has denied that a radio call to Lando Norris signalled an attempt to hinder Max Verstappen.

As the drivers headed out for their final runs in Q3, Lando Norris was told over the radio: "Verstappen hasn't set a time yet... don't do him any favours."

Indeed, the Dutchman, who had set the fastest time of the session and momentarily claimed pole, had subsequently had the time deleted, and was therefore yet to post a time.

Coming in a week in which Zak Brown warned of the dangers of team alliances, it wasn't lost on many that Norris' McLaren is powered by a Mercedes power unit.

Speaking to Servus TV, Helmut Marko acknowledged that he had heard the call and questioned whether the Woking outfit was indeed assisting its engine partner.

"It's frustrating when you set the fastest time," said the Austrian. "But in Turn 4 he got a gust of wind from behind and it took him out. He lost time because of it, not gained.

"Then on the second run, Lando Norris got told not to do Max any favours. Very sporting of the Mercedes squad. And then with Vettel, of course, he was busy with the car, that he keeps it on the road. It was a bit unfortunate."

"We have to make it clear, we drive for ourselves and not for anyone else," said Andreas Seidl, when asked about the call. "Our aim is to finish as high up as possible with our two cars.

"I guess it's normal that, like everyone is doing, and Max was no different, you don't want to give anyone a tow, because it's a benefit for the other car. Qualifying is about doing the lap time yourself without the help of anyone else.

"I think this radio call... probably they are referring to... when you look at what everyone did on the main straight, after finishing the lap, you just tried to get out of the way, out of the slipstream, to make sure that everyone can do his lap himself, and without additional help."