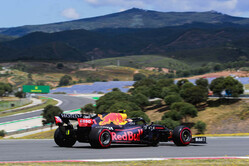 Mercedes topped the timesheets in both of yesterday's sessions, Valtteri Bottas in the morning and Lewis Hamilton in the afternoon. It was subsequently revealed however that both cars had incurred damage and therefore there is likely to be more pace there.

Max Verstappen was second quickest in both sessions, however the Dutchman wasn't entirely happy with his car's handling.

Indeed most drivers were unhappy with grip levels and there are already suggestions that Pirelli - not for the first time - has been conservative in its choice of compounds.

Much like McLaren, AlphaTauri has looked a little off the pace thus far this weekend, though the difficult conditions, in terms of the lack of grip and blustery winds, hardly help matters.

Michael Masi continues to tinker with the track limits rules, the FIA's race director deeming overnight that Turn 14 should join Turns 1, 4 and 15 as no-nos.

Over the course of yesterday's two session, no less than 65 times were deleted.

The lights go green but it is a couple of minutes before a driver heads out, and that driver is Stroll, his Aston Martin having been liberally daubed with flo-vis.

He is subsequently joined by Vettel, Schumacher and Mazepin.

There's an early spin for Schumacher at T14, while Mazepin also has a moment.

While the Aston Martin pair both pit following an install lap, Schumacher posts the first time of the day, a 23.026. Mazepin responds with a 24.955. The German is on mediums, while his teammate is on softs.

"Anything we can help you with?" Schumacher is asked. "Not really," he replies, "I'm just trying to find the limit."

Mazepin and Raikkonen have their times deleted for running wide at different corners.

Ricciardo goes fourth with a 20.528 as Gasly has his time deleted.

A number of drivers are opting for two warm-up laps, and this appears to be Ricciardo's strategy.

Norris is also opting for two warm-up laps, as Ocon goes quickest (19.672) on the mediums. The Frenchman is quickest in the first and final sectors.

Leclerc goes second (19.743) on softs, as the Mercedes pair head out, leaving Verstappen as the only no-show.

The Mercedes pair are also going for two warm-up laps, Bottas' first is a 1:24 while Hamilton does a 1:28.

The VSC is deployed, but it is not clear why. Ah, an advertising hoard has been blown over.

That VSC wrecked a number of flying laps, not least those of the Mercedes pair, Verstappen and Vettel.

Stroll is currently the only driver yet to post a time.

Gasly goes quickest but his time is subsequently deleted, as is Hamilton's.

Featuring a number of updates which his teammate doesn't have, Stroll can only manage a 20.716, while Vettel is currently on 20.214.

"I don't get why Lewis backs up so much," wonders Verstappen. "He has so much space."

"I'll do a cool down after this," says Stroll. "No, no, no," comes the response, "your tyres aren't warm enough yet."

As attention turns to the qualifying sims, Hamilton heads out on fresh softs, as does Verstappen.

The Dutchman posts an 18.545, the only purple being the final sector.

"There are a couple of areas we're better," Christian Horner tells Sky Sports, "Turn 3 they are better.

"Last year this was a big Mercedes circuit, but hopefully we can take this form into qualifying and put them under pressure. Based on this, it's going to be really, really tight."

Raikkonen improves from 11th to 7th with a 19.415, and while Alonso goes third with an 18.735, the Spaniard subsequently has his time deleted.

Hamilton heads out on fresh rubber, the Briton, again, opting for a double warm-up.

A spin in Turn 14 for Norris briefly brings out the yellows as Alonso has another time deleted.

The yellows causing Hamilton to abort his lap. Next time around he improves to 18.725, just 0.180s off Verstappen's best.

Perez goes fourth with an 18.840, the Mexican only improving in the middle sector.

Behind the Bulls and Black Arrows, Ocon is fifth, ahead of Leclerc, Norris, Gasly, Raikkonen and Sainz.

Meanwhile, Bottas is unable to improve on third.

Despite not posting a single PB, Verstappen consolidates his top spot with an 18.489, thereby extending the gap to Hamilton to 0.236s.

Vettel, currently 17th, complains of "big vibrations" on his current set of tyres. To add to his woes he has his time deleted.

It wouldn't be a proper session without Mazepin hitting the kitty litter, and the Russian duly obliges. The Haas driver going off at Turn 11.

A late improvement from Stroll, however he is still only 15th.