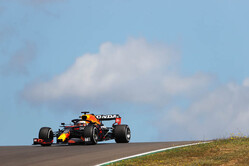 Ahead of today's opening practice session the air temperature is 17.4 degrees C, while the track temperature is 30.7 degrees. It is bright, sunny and warmer than two weeks ago at Imola.

And talking of Imola, today marks 27 years since Roland Ratzenberger lost his life during qualifying for the San Marino Grand Prix.

And on a weekend we will also mourn the loss of the legendary Ayrton Senna, we witness the FP1 debut of young British hopeful, Calum Ilott who is in the Alfa Romeo usually driven by Antonio Giovinazzi.

The lights go green and Perez leads the way, the Red Bull fitted with a large aero rake, followed by Tsunoda, Ilott, Raikkonen and Mazepin.

As more drivers head out they have to take avoiding action as there is a piece of debris in the middle of the pitlane exit.

Debris or no debris, soon all but Stroll and Verstappen are on track, while the timing screen lights up as the first times are posted.

Of the first wave, Bottas goes quickest (23.778), ahead of Hamilton, Schumacher, Ricciardo and Ilott.

The track limits crackdown continues and this weekend Turns 1, 4 and 15 are the corners that the stewards are keeping an eye on. Indeed, Leclerc, Gasly and Sainz are among the first to have times deleted.

Leclerc complains that his rear brakes are cold.

As Verstappen finally heads out, Ricciardo goes quickest with a 21.821. The Dutchman (on hards) subsequently posts a 21.854 to go third.

Ocon improves to sixth (22.125), splitting the Aston Martins, while Sainz is eighth, ahead of Alonso, Leclerc and Gasly.

In the pitlane, Vettel stops at the wrong garage. He parks up at the McLaren slot, which six months ago was actually used by McLaren. "I wondered why there was nobody there," he admits.

"Last year, it was all about understanding the track surface in Portimao," says Pirelli. "So free practice is all about getting to grips with the surface and finding out how it has changed. Or not."

Improving to 20.500, Verstappen isn't entirely happy with his car, unhappy, in particular, with the rear. Despite his unease the Dutchman improves to 20.318.

Ricciardo is among the first to switch to softs, but the Australian barely improves, posting 21.204 to go sixth.

On his second flying lap on the softs Bottas goes top with a 20.221. The Finn subsequently improves still further (20.088), going quickest in the last two sectors.

At the other end of the timesheets, Ilott is 16th, ahead of Alonso, Tsunoda, Norris and Mazepin.

Wow! Bottas goes quickest in all three sectors, raising the bar with a 19.648.

"What the hell" asks Russell of Mazepin. The Briton subsequently goes third with a 20.529... we hope he's not attempting to race Bottas again.

As Gasly posts 20.444 to go third, Raikkonen and Ilott have their times deleted.

With less than 15 minutes remaining we've yet to see Verstappen on the softs, also teammate Perez who is currently 10th.

As he starts his first flying lap on softs, Verstappen complains that they are vibrating. "What a joke mate, I can hardly see where I'm going with the vibration."

Despite not being able to see where he's going, Verstappen goes quickest in S1. Meanwhile, having run wide, Hamilton aborts his first lap on fresh softs.

Verstappen continues to set a strong pace, going quickest in S2 and finally crossing the line at 19.673, just 0.025s down on Bottas.

"Ah, it's impossible to drive, Mate," he insists.

Meanwhile, Russell, who remains fourth quickest, ahead of Hamilton, switches back to hards.

With 5 minutes remaining, all bar Verstappen, Raikkonen and Ilott are on track.

PBs in all three sectors see Perez go fifth, however the Mexican is almost 0.7s off his teammate's pace.

Hamilton goes quickest in the opening sector but subsequently backs off.

Another set of PBs sees Perez go third (19.846), as Hamilton once again abort his lap in the second sector.

Quickest in the final sector, Leclerc goes fourth with a 19.884.