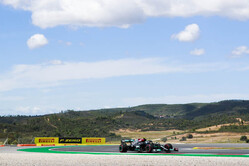 Valtteri Bottas set the fastest time of the day in FP1 at the Portimao circuit on the P Zero Red soft tyre this morning, while his Mercedes team mate Lewis Hamilton topped FP2 on the same compound. In both sessions, the Red Bull of Max Verstappen was second-quickest, while Ferrari was fourth-fastest in both practice sessions.

The afternoon session was somewhat warmer than the morning, with track temperatures peaking at 39 degrees centigrade and ambient temperatures in the region of 20 degrees centigrade. There was also some wind in the afternoon, which occasionally affected the aerodynamic performance of the cars. The FP2 session was delayed by 10 minutes due to safety checks on drain covers, but ran for the full allocated hour.

In the morning, the majority of the drivers ran the P Zero White hard tyre before switching to the soft tyre at the end of the session. In the afternoon, most of the field started on the P Zero Yellow medium tyre before going onto the soft for a qualifying simulation.

Mario Isola: "It was a reasonably straightforward pair of free practice sessions in Portugal with no big surprises, apart from a bit more wind in the afternoon that affected the times slightly, making the track slower. The tyre performance exceeded expectations, with just a little bit of graining on the front left of the softer compounds in the morning on a 'green' track. This improved in the warmer conditions of the afternoon. The track surface is still smooth making it sometimes challenging for the drivers to find the right level of grip. With a big pit stop time penalty, it should be a one-stop race on Sunday for the majority of drivers and we can already see that all three compounds could play an important role in this - which is why all the compounds were run extensively throughout the day".