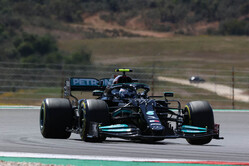 With Mercedes having topped the timesheets in both of yesterday's sessions, this morning it was Max Verstappen's turn, the Dutchman edging out Lewis Hamilton by 0.236s.

However, while both Mercedes are understood to have suffered performance compromising damage yesterday, Verstappen has rarely been happy with the handling of his car this weekend.

Other than the wind, the slippery nature of the track surface isn't helping, and other than spins we have seen numerous times deleted because of the continued crackdown on track limits.

Hamilton and Verstappen were both ably supported by their teammates earlier, but it remains to be seen if this will continue for the rest of the weekend, certainly, both Bottas and Perez have some way to go to make up for their Imola performances.

The biggest surprise thus far this weekend is Alpine, and while Ocon was best of the rest earlier, teammate Alonso would have been 'up there' also but for having his two best times deleted.

Ferrari continues to look good, with Carlos Sainz clearly pushing teammate Charles Leclerc. Indeed, of the drivers that changed teams over the winter, the Spaniard appears to be the most settled.

McLaren has yet to convince this weekend, and rather than battling at the front of the midfield looks likely to be under pressure from AlphaTauri and possibly Alfa Romeo.

Aston Martin continues to disappoint, and while Lance Stroll has sole access to the various updates brought here, they don't appear to be making much of a difference based on the evidence thus far.

Whether it's the conditions or the shortcomings of the car, Russell hasn't featured so far this weekend, while Schumacher finished an impressive 15th earlier.

Without all the hyperbole of the broadcasters, this weekend the title really does appear to be on a knife edge, and it would be a brave man who makes the call.

We could be in for some surprises over the next hour and again tomorrow.

Indeed traffic and the yellow flags that resulted from various mishaps earlier caused a few drivers to abort their hot laps and this could be a factor this afternoon, certainly in Q1.

In the moments before the start of Q1, Bottas' car is still up on its stand, with a number of mechanics working on a reported gearbox sensor issue. Norris' car also has an issue, thought to be electrics-related.

The lights go green, and the Haas pair are first out, both are on softs. The Ferraris and McLaren also appear, the latter both on mediums.

Of the first wave, Giovinazzi goes quickest (19.963), ahead of Raikkonen and Vettel.

However, as was the case earlier, most drivers are opting for two warm-up laps, consequently, Norris posts a far more sensible 19.918 and Sainz a 19.480, putting the Spaniard top.

Leclerc has his first time deleted, before he posts 19.894 to go second.

However, long with Leclerc, Raikkonen and Mazepin, Hamilton has his time deleted.

No sooner has Verstappen gone third than he is demoted when Bottas posts a 19.205 to go top.

As Hamilton is told about his time deleted, Alonso spins in Turn 14 thus bringing out the yellows. It's a scrappy lap from Hamilton who posts a 19.493 to go fifth.

Onboard with Hamilton shows just how much Hamilton is struggling to control his car.

Elsewhere, Perez is off and in the gravel in Turn 4, however he is able to extricate himself. Replay suggests he was caught out by the wind at the rear of the Red Bull.

Vettel goes fourth with a 19.403, which suggests a raft of improvements that could catch a few unsuspecting drivers out.

Norris goes top with an 18.794. The timing screen is about to go mental.

Though the session is at an end, a number of drivers are still on hot laps.

Leclerc goes sixth and Ocon fourth, which drops Ricciardo into the drop zone.

"Daniel, we finished P16, Ocon jumped us right at the end. We're P16." The response is one long bleep.

Leclerc improves to 8th with a 19.107, which produces a concerned shake of the head from Mattia Binotto on the pit-wall.

The Bulls are struggling, and one wonders if they'll make the switch to softs.

Ahead of the final run, Russell, Tsunoda, Sainz and the Alfa pair comprise the drop zone, with Alonso, Gasly and Leclerc hovering.

Gasly complains that he has a lot of sliding and that his front tyres are not working.

Bottas, Norris and Hamilton head out on softs.

On softs, Sainz has a poor opening sector, though he manages a PB in S2. At the line it's a 19.142, which is only good enough for ninth.

Leclerc goes eighth, the Monegasque is on mediums, the tyre the Scuderia wants to start the race on.

PBs in the opening sectors from Gasly, as Giovinazzi and Alonso also look set to improve.

Tsunoda can only manage 12th, while Alonso also fails to make the cut.

"It's too unstable in sector one," complains Tsunoda, "it's no good at all."

Despite a mighty effort, Russell can only manage 19.109 which puts him 11th.