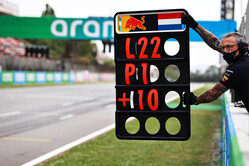 Christian Horner insists there was little Red Bull could do in reaction to Mercedes decision to switch Lewis Hamilton to a two-stop strategy.

Having pitted the Briton on lap 28 for new mediums - four laps after Max Verstappen had also stopped for a fresh set of the yellow-banded rubber - just 14 laps later, while running second to the Dutchman, Mercedes pitted the world champion once again, for another set of (used) mediums.

Recognising the move, Christian Horner declared "it's Hungary all over again", the Red Bull boss referring to the strategy change at the Hungaroring in 2019 when the German team made a similarly late call to Hamilton while he was running second to Verstappen, thereby turning the race on its head.

"In fairness, hats off to Mercedes and Lewis," Horner told Sky Sports at race end, "they were just quicker than we were today, the fact they could follow so close through the first two stints of the race.

"We were surprised they didn't go for the undercut earlier and pull the trigger," he admitted, "so we'd managed to keep track position.

"But the problem is that when the field opens up to the degree that it did behind, Lewis has then just got a 'free' stop.

"So they banked that, then you've given up track position, so you're in that horrible situation as the leader of either trying to brave it out to the end because at that point you've conceded the track position.

"So we knew he was probably going to catch us."

"It's so difficult I guess at the front for Red Bull to take the right decisions," said Toto Wolff, "because you give up position you could have lost the race. Second is just easier when you have the gap to make that call.

"We had a quick car," added the Austrian, "but obviously when you lose the position on the first lap you are on the back foot."