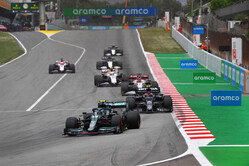 Lance Stroll: "It is a bit frustrating not to get the point at the end. We fought hard with the AlphaTauri, but just did not have enough to get P10. We also raced hard against Fernando [Alonso] and the moment at Turn One was a racing incident: I braked deep into the corner and he was late on the brakes. We made some contact and he pushed me wide. This weekend has helped us continue to learn and improve the car. We will keep pushing to unlock some more speed before Monaco."

Sebastian Vettel: "It was quite a tricky afternoon, and I was running out of tyre life at the end, even though we went for the two-stop strategy. I made quite an early second stop and came out behind Kimi [Räikkönen], which I think hurt my tyres quite a lot. That is what made it difficult to fight for points. With hindsight, it is always easy to say what you would do differently, but it was difficult to fight the cars around me in the closing laps when they had a tyre advantage. But we will keep working hard and we know there is a long season still ahead of us. The new parts we had here helped, and we need to keep taking steps forward each weekend."

Otmar Szafnauer, CEO & Team Principal: "After 66 hard-fought laps, our two drivers finished today's Spanish Grand Prix in the same positions as they had started it from: P11 for Lance and P13 for Sebastian. Yet it was an eventful afternoon for both of them. Sebastian made up a place at the start and, until the Safety Car was deployed, our two cars were running in line astern, Lance just ahead. Soon afterwards, Lance pulled off the overtaking manoeuvre of the race, a brilliant move on Fernando [Alonso], thereby moving up to 10th. However, towards the end of the race, both our drivers were passed by Pierre [Gasly], dropping them to 11th [Lance] and 13th [Sebastian], with the result that, again, frustratingly, we narrowly failed to score points."