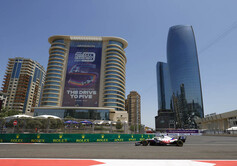 The sixth round of the 2021 FIA Formula 1 World Championship began with practice on Friday at Baku City Circuit, Baku as teams prepared for Sunday's Azerbaijan Grand Prix.

Mazepin and Schumacher ran identical tire strategies in FP1 with both VF-21:s utilizing the Pirelli P Zero Yellow medium rubber to start. Their initial wake-up runs were followed by a baseline outing on the Red soft compound - both drivers duly setting their fastest laps of the session. Schumacher logged a best time of 1:46.899 for 19th with Mazepin recording a fastest tour of 1:46.945 for 20th. A high-fuel stint back on the medium tires concluded their respective FP1 run-plans.

Lap times dropped in the afternoon as the track rubbered in. Mazepin opened FP2 with a short run on mediums before bolting on a fresh set of soft tires for his quali simulation. The Formula 2 graduate posted a 1:45.563 on his fastest lap to place 18th overall. Mazepin capped his day with an 11-lap high-fuel run sampling the harder White compound. Schumacher's session was blighted early on by an oil pressure issue after just four laps on hard rubber. An extended stay in the garage ate up precious time but the German returned on softs to clock a 1:46.095 for 19th. Schumacher added another five laps to his tally in the dying minutes of FP2, a short high-fuel run - also on softs, seeing him through to the checkered.

Nikita Mazepin: "I really enjoyed today; I think we're in a good place. We made some important steps forward. Although the car isn't performing on high and low downforce tracks, the things that we are able to extract, in terms of the set-up of the car, are encouraging. There's obviously plenty to go through but today has definitely gone to plan. In terms of feedback, I felt that tire overheating on long runs is a big issue, not only for us but for other competitors. The track is very low grip and that makes the asphalt just overheat the tires, that's just something I have to get used to coming from Monaco and Barcelona. I think long runs were our stronger point today though. At the moment where we stand on Friday, I'm not imagining that we'll go forward too much come Sunday, but who knows, maybe Saturday and Sunday can bring some surprises."

Mick Schumacher: "The track was quite dirty to begin with this morning and it didn't really clean up through the first session. With F2 running it did clean up a bit for FP2. Unfortunately, we didn't get all the laps in that we wanted. I had a few issues, but I still got to do one flying lap on the C5 and one or two laps with high fuel. We will probably have to change engines back to the first PU so we will find out and hopefully everything will be fine for tomorrow. In general, we have stuff to learn but we have done quite a bit already and now it's about putting the puzzle together to be in a good window for FP3 and then for qualifying."

Guenther Steiner: "It's always difficult to come here - you know, the track is very green when we start, and our two drivers are rookies, they've both raced here only once before in F2. We knew it was going to be a challenge, but I think the guys did a good job of it. FP2 went well for Nikita (Mazepin), he got in the most running he could there. Mick (Schumacher) had a good FP1, but in FP2 there was a problem with his oil pressure. We tried to chase down what it was, but we could never find out, so he had to come in and out all the time. He at least got half a session in there in FP2, but he's saying he's ready for tomorrow. We continue on the learning curve Saturday - but as you can see, we go from each practice session and improve. That's the aim and that's what we'll continue to do."