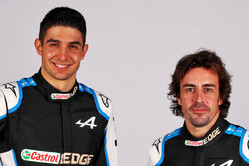 After an eventful outing in Baku last time out, Alpine gets ready for the first of two home Grands Prix in France. Executive Director Marcin Budkowski underlines the importance of the team's home race and discusses the areas for improvement to the A521.

How special is a home Grand Prix?
Marcin Budkowski: A home race for every team is special. Alpine is a French brand with its headquarters in France, while the Formula 1 Team is primarily based in the UK, so we could even say we have two home races! It's a pleasure to represent Alpine on France soil, especially in such a beautiful region, but there is also added attention on the team. There are more fans supporting us in the grandstands, VIPs and executives from the Renault Group and therefore the extra pressure to perform. Once the race weekend starts, though, every individual is focused on getting the most out of the car, the drivers and the whole Team as we do at every race.

What are the key challenges at Circuit Paul Ricard?
MB: Circuit Paul Ricard is a great circuit with some exciting combinations of slow, medium and high-speed corners as well as long straights that give opportunities to overtake. It's a more conventional Formula 1 circuit than Monaco and Baku with the runoff areas and drivers able to push the limit without the risk of extreme consequences that we saw at the last two rounds.

Besides a few minor improvements to the car, we've had to make some modifications to our rear wing, in line with the new technical directive issued by the FIA.

What is the verdict after Azerbaijan?
MB: Overall, it was an encouraging weekend up until Sunday. Our pace was relatively competitive on Friday up until Saturday and we reached Q3 with one car after a tricky session with many yellow and red flags. It was disappointing for Esteban to retire early on with a reliability issue, and unfortunately our race pace wasn't strong enough to allow Fernando to fight for good positions in the race. It took a fantastic effort from him to secure sixth position in the last two laps.

How is the team aiming to combat its current race pace deficit?
MB: We have work to do to understand our race pace deficit and it's something we're actively investigating. It's clear the car is capable of good performances in qualifying, but on some circuits, we can't seem to replicate that good pace in race conditions, and that's something we need to get on top of to score bigger points in the Championship. We hope that our findings so far will help us achieving a good result in France, on a full-time circuit more typical of what we normally see in Formula 1.

It's been a long three years since Esteban Ocon last raced on home soil. He heads to Circuit Paul Ricard feeling determined to deliver a strong result for his, and the team's, home fans as the French Grand Prix gets set for 'la Summer Race'.

How much are you looking forward to racing in front of your home fans?
Esteban Ocon: It feels like so long ago since I lined up for my home Grand Prix in France, so I'm very much ready and looking forward to doing that once again this weekend. Obviously, I wasn't racing in 2019 and, last year, there wasn't a French Grand Prix, so I definitely have extra motivation and energy coming into this race. I think everyone in the team is desperate for a good race on home soil, and we'll be working hard to do just that. It's the south of France, nice weather, fans in the grandstands and the fastest cars in the world... I can't wait!

Do you enjoy racing at Circuit Paul Ricard?
EO: It's a track I like actually, and I have some nice memories there. It's where I had my first win in single seaters in the 2013 Formula Renault Eurocup, so that's something I'll always remember. I've driven a lot of laps there for various tests in previous roles and, I was even at Circuit Paul Ricard earlier this year in the 2018 car to prepare for the season. A lap is pretty intense with some fast corner combinations and some high-speed sections. There are some opportunities to overtake too, mainly into the back chicane, so I'm sure it'll be a good event for the fans to watch. We'll be giving it our maximum and pushing for points.

What's your mindset for the French Grand Prix after last weekend's disappointment?
EO: Leaving Baku without points was definitely frustrating. It was just one of those weekends where it didn't quite click together. In qualifying, I was feeling good and certainly had the pace for Q3. Then, the race, we weren't able to show what we were capable of achieving with the early retirement. The sprint at the end would have been enjoyable, no doubt, but we move on and go into the team and I's, home race with added motivation to comeback with a big result.

Fernando Alonso will race in blue colours at the French Grand Prix once more as the Spaniard returns to Circuit Paul Ricard for the first time since 2018. Fresh from a season best sixth place finish at the Azerbaijan Grand Prix, Fernando is aiming to continue his momentum on the team's home territory.

It will be your ninth ever French Grand Prix in Formula 1, and second time at Circuit Paul Ricard, are you looking forward to racing there again?
Fernando Alonso: I always enjoy racing in France. I've had some good results in Formula 1 and in other motorsport categories in this country, but Circuit Paul Ricard is actually a track I don't know so well as I've only raced here once in Formula 1. The track has been resurfaced with some small tweaks to help improve the racing, so we'll assess that early in the weekend. The circuit has quite a few high-speed sections and Turn 10 will be fun in these modern Formula 1 cars. There are quite a few runoff areas around the circuit which means any mistakes are less likely to punished by barriers either side of you. This will be different to what we experienced at both Monaco and Baku and hopefully we can put on a show for the fans.

It was an exciting last two laps in Azerbaijan, how did it feel inside the cockpit?
FA: It was a lot of fun and I've watched the onboard back quite a few times. We were quite lucky that the red flag brought everyone back for a standing restart, but we were given the opportunity and we seized it. You have to capitalise on these moments in a season. Our tyre choice after the red flag was smart and we seemed to have immediate grip on the first lap of the restart so we could try some bold moves into Turn 1. Then overtaking into Turn 5 is not normally where you can make a move, but we did it and made it stick. Looking back on the Sunday, our overall pace was a little poor during the race, so we need to look at why that was the case. I was happy to come away with some solid points in Baku, it was a well-deserved result for the team.

You've had some good results in the past in France, can you highlight your favourite memory there?
FA: The win in 2005 at Magny-Cours was good for obvious reasons. We led the race from the start, and I was able to pit and come out still ahead of everyone. It was my fifth and Renault's sixth win of the season and that momentum we carried through the rest of the year was pivotal in taking both championships. Winning the 24 Hours of Le Mans twice was also very special, and I won't forget those memories. Let's hope we can make some more memories at Circuit Paul Ricard this weekend.