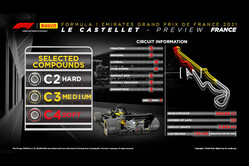 The French Grand Prix at Paul Ricard, returning after a year off due to the Covid-19 pandemic, will use the middle three compounds in the Formula 1 range: C2 as the P Zero White hard, C3 as the P Zero Yellow medium, and C4 as the P Zero Red soft. This is the same choice as was made in 2019, when the race was last run.

These tyres in the middle of the range are well suited to the varied characteristics of the track. New asphalt laid on nearly all the corners just before the 2019 race ensures a smooth surface for them to work on.

Tyre degradation at Paul Ricard is generally low: however, Turn 13 is particularly demanding in terms of continuous energy demands on the tyre, as is the Signes corner after the Mistral straight.

• Sector three at the Paul Ricard circuit is more about lateral forces rather than traction and braking; the rest of the lap is quite balanced (one of the reasons why this track is a well-known test venue).

• Before the track returned to F1 in 2018 following a prolonged absence, a chicane was placed in the famous Mistral straight to slow down the high top speeds, making it effectively two separate straights with a chicane in the middle.

• The winning strategy back in 2019 was a one-stopper, from medium to hard. This was adopted by all the podium finishers, with all but seven of the drivers starting the race on the medium tyre.

• French driver Romain Grosjean will return to Formula 1 at Paul Ricard for a test at the wheel of a Mercedes on June 29 (the originally-planned French GP date, before the race was moved forward by a week) on Pirelli demonstration tyres. Grosjean's F1 farewell was cut short by his fiery accident in Bahrain last year: now he returns to sign off in style.

Mario Isola: "We're back to the combination of tyres used for the first two races of this year, right in the middle of the range. This is the most versatile combination, well suited to a wide variety of different demands, and this is also what makes it a good match for the Paul Ricard circuit, which contains an interesting mix of corners. This also makes Paul Ricard a good testing venue, and while we've not had a Formula 1 race there for two years, we've been testing next year's 18-inch wet tyres at this track earlier in the season, and we also raced there last month in the GT World Challenge.

"For France, we're sticking with the same nomination we had at the last French Grand Prix, which resulted in a one-stopper for most of the drivers. However, we saw that there were a few different types of one-stopper that were run, giving rise to a number of distinct strategies."