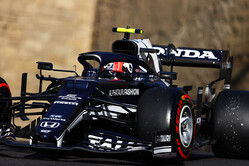 Pierre Gasly: "Honestly, it's been a pretty incredible day. Topping the session in FP3 meant I was super excited coming into Qualifying. The pace was clearly there today, and we felt strong, we've pushed all weekend and I've just really clicked with the car here in Baku. I'm really pleased with our Quali performance, I think at the end we were still in a position to fight towards the front but P4 is great and the margins to the front row were so tight. It was a fantastic effort by the whole team, and I think we can be very proud of the progress we're making. I've tried to build it up every lap here, session after session and push the limit each time and I think I've done that well this weekend. I've managed to put everything together in Q3 and we're in a really strong position starting tomorrow's race. Obviously Yuki's day didn't end as planned but he's done really well here so far this weekend, he's worked hard on building up his pace through the sessions and today he made it through to Q3 for the first time so he should be really pleased with that."

Yuki Tsunoda: "It's a really mixed feeling today, I've made good progress here in Azerbaijan through the weekend, which has been really positive and then I made it through to Q3 for the first time. I think there was the potential to be starting the race in a higher position, but I was just pushing too much, and it didn't pay off today, so obviously I'm disappointed and I just want to apologise to the team. Tomorrow is a new day though and I think, compared to Monaco, overtaking is a lot easier here so that, combined with a good tyre strategy, could be good for us in the race."

Jonathan Eddolls (Chief Race Engineer): "This track is often one which can throw up surprises and today was no exception. We showed a good performance yesterday so the changes to the cars for FP3 were more fine tuning, trying to account for the hotter track temperatures that we would face in FP3 and then react for a cooler Qualifying. We saw an improvement from the alterations we made and FP3 showed that we had a car capable of fighting towards the front of the tight midfield.

"We headed into Quali believing we had a chance to get both cars into Q3 if we could put it all together. Qualifying was a very busy and intense session with multiple red flags and aborted laps, which meant we had to change our plan, but both the team and drivers adapted really well to this, particularly in Q1.

"Yuki put in a fantastic lap in Q2 and both drivers made it through to Q3 for the first time this season. They both put in a great performance today, with Pierre ending in P4 and just two thousands behind Max in P3. Yuki's first lap put him in P8 but unfortunately, he pushed a bit too hard on his second lap, meaning he locked up and has sustained damage to the front suspension from the impact. It's part of the learning experience though and the rest of this weekend he has kept his head down, built up the pace and showed a very good performance. There's some work to do on his car tonight and we'll also work on preparing both drivers ahead of the race, so we can aim to keep both cars in a point scoring position."