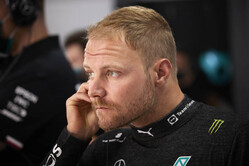 Mercedes boss, Toto Wolff has downplayed the move which has seen Lewis Hamilton and Valtteri Bottas swap chassis this weekend.

Conspiracy theorists were quick to react this week when Valtteri Bottas revealed that this weekend he would have access to Lewis Hamilton's chassis while the Briton would use the chassis the Finn had in Baku.

Those believing that the German team is favouring the seven-time world champion to the detriment of his teammate had grist added to their collective mills when halfway through the opening session, Hamilton claimed "there is something wrong with this car".

While the Briton was out-paced by his teammate in both sessions, team boss, Toto Wolff was keen to down play the significance of the swap.

"We swap parts around all the time," the Austrian told Sky Sports. "This is part of the planning as these are carry over chassis, they're around for a second season, so we're not accumulating millions of miles on one."

Keen to allay the fears of his drivers... and the suspicions of fans, Wolff revealed that a third chassis is available if required.

"If it calms the driver's mind, we have a spare chassis, which is a brand new one, we can always do that," he said.

"It's the chassis that was splendid in Monaco," he added. "I mean, you listen to the engineers and said it's all tested and it's stiff. There shouldn't be any difference but if the driver feels that it's not then it's definitely not worth trying to make a point here, then you just need to change."

"The balance is good, the tyres are working well, I'm confident with the car, I can trust the car," said Bottas at the end of the day's running. "I think that's the biggest difference."

However, the Finn was unsure if his revived confidence was due to the chassis swap.

"It's hard to say if its chassis or the track conditions, but it is a lot better feeling than two weeks ago, that's for sure," he said. "I feel we have started the weekend on the right foot. I feel everything is feeling quite OK, and I've been comfortable and pretty fast with the car so far."

"It's a different track, so very rarely do you ever have any differences between the chassis," said Hamilton.

"They all feel pretty bad," he said of the tyres, the Briton having failed to post a significant time on the softs. "I think the hard is probably the better feeling one because it's quite seems quite a heavy duty with the temperatures here... the softer you go, the worse it feels.

"I would imagine the hard is going to be the one that most people can't wait to get on to, but I'm not really quite sure which tyre is quicker. The soft tyre seems to run out halfway through the lap and then the medium tyre, I think is a little bit more resilient, but doesn't give you a huge amount of grip."