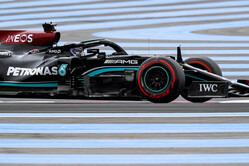 Lewis qualified in second place at the Circuit Paul Ricard, after exploring several balance adjustments throughout the weekend to put the W12 in a happier place for Q3.

Valtteri will start in P3, with the two Mercedes drivers splitting the Red Bulls. Both drivers will begin the race on the Medium compound tyre.

Lewis Hamilton: It's great to see the fans here and it warms my heart to see people coming together finally after this difficult period for us all. It's been a really hard weekend trying to get the car into a happy place and you wouldn't believe all of the changes I've made since FP1. Congratulations to Max, he did a great job today.

On long run pace I think the Red Bulls were a tenth or two quicker than us in FP2 but my car is in a much different place now so I'm just going to stay hopeful and do everything that I can tomorrow. Obviously in second you've got a fighting chance down to Turn 1 and there's going to be some interesting strategy calls tomorrow. Maybe it'll rain so we'll potentially get to see the rain masters do their thing! We're loving the battle so we're just going to keep pushing, keep fighting, and giving it everything.

Valtteri Bottas: It's been a strong weekend, for sure a lot better than a couple weeks ago and I was hoping to fight for the pole. The last run in Q3 felt good so I didn't feel like there was much more lap time to make up, I think Red Bull had the edge in a straight line here which made the difference.

We are definitely fighting for the win tomorrow, we're between the two Red Bulls with two cars against one so on strategy, we can be smart and bring the challenge to them. Nothing is going to come easy but we're ready for the challenge tomorrow.

Toto Wolff: That was an exciting qualifying session and a solid performance to put our cars P2 and P3, with just a tenth of a second between them, but we weren't quick enough to claim pole position today. We made a good step with Lewis's car from yesterday, and he felt much more comfortable with the balance once he was running in qualifying; and Valtteri has bounced back strongly from a tough weekend in Baku. Like the cars around us, we will start the race on the Medium tyre, which will give us the opportunity to race hard tomorrow and hopefully put pressure on Max. The long runs yesterday looked closely matched, so I'm sure we're in for a real fight all the way to the chequered flag.

Andrew Shovlin: There's quite a gap to pole and our laps were pretty good in the end so second and third is a fair result for us. Valtteri continued build through the day from the solid baseline he'd established yesterday and Lewis managed to recover some confidence in the car after a difficult Friday; quite a bit of work has gone into fine tuning the balance and it doesn't feel like there was much more to come.

The early parts of the session were a bit messy as we kept getting caught in a bunch of cars on the out-lap and struggled to get the tyres in the right window. By the end we had good track position and we looked pretty close to Max for the first half of the lap. Our main issue seems to be a loss on the straight from turn 9 down to turn 11 and by sector three we're no longer able to gain anything back in the corners. We've seen many times this year that our race pace is better than our qualifying and we've shown that we can win races from behind so we're still optimistic that we're playing for the win tomorrow.