It's just not acceptable, admits Wolff 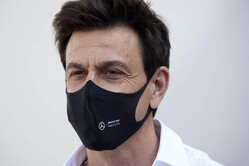 Following a nightmare Azerbaijan Grand Prix, Mercedes boss, Toto Wolff admits that his team is not operating as it should.

While Lewis Hamilton's failure to score points - effectively missing an open goal following the 'retirement' of Max Verstappen – was eventually down to an errant finger, his car was off the pace for much of the weekend, and it was only a Herculean effort from the world champion that appeared to put the team back in contention on Saturday and again on Sunday.

For Valtteri Bottas, on the other hand it, was a total nightmare, and followed the shambles that was Monaco, where a pit stop whilst in contention for a podium finish, effectively lasted a couple of days.

"I can’t remember having this kind of weekend before," admitted the Finn following Sunday's race. "Yes, there were a few weekends when I’ve had bad sessions but always, at some point, I had the pace.

"But this weekend it’s been all the time like this, and during the whole weekend I still haven’t understood what is wrong. I know myself where’s the limit and I cannot go faster than this, and then you’re still six, seven, eight tenths behind. It’s not normal, so it’s something we need to understand before going to France."

"I think there's lots of things that are not running smoothly as they have in the past few years," admits Wolff. "Operationally we are not at our A-game.

"We haven't found really the sweet spot of the car through qualifying and race, of having a quick qualifying car and a quick race car," he added.

"There's so much that we need to improve, that I just want to get on it right now, in order to make sure that we are actually able to compete for this championship. You can't continue losing points, like we've done in Monaco and here. It is just not acceptable for all of us."

Asked if the back-to-back weekends in Monaco and Baku were the worst he can recall, he admitted: "Yeah, they are the toughest...

"Because not having performance in Monaco, and Valtteri, who would have made it solid on the podium, needing a pitstop of 36 hours, is not really a great achievement, based on the standards that we're setting ourselves.

"Then the car that was almost all sessions nowhere," he added, referring to the Baku weekend. "Then, to be honest, cruising in third and even trying to make it was OK.

"But it's just not acceptable that we are not getting the car into a performant position after the start, or out of the pit stops. It's just we're losing seconds over seconds."